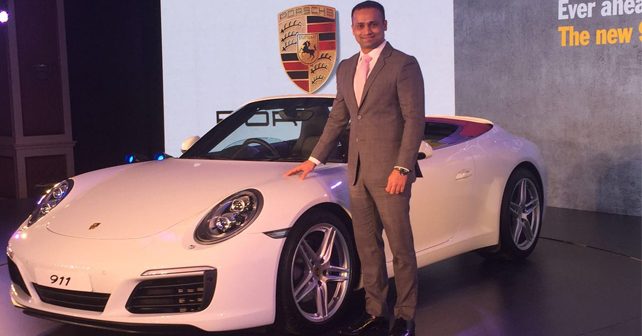 To meet emission regulations that are being imposed for a cleaner environment, Porsche has had to put their naturally aspirated 911 to sleep. Because of this, now the 911’s purists who want a brand new one will have to settle for forced induction motors at the back of their heritage bred sports car.

The new Porsche 911 has now made its way to Indian shores as Porsche has now launched the new 911 Carrera, Cabriolet, Carrera S and Turbo S. The Carrera, Cabriolet and Carrera S come with a rear mounted 3.0-litre, twin-turbo flat-six engine that produces 370hp in the Carrera/Cabriolet, and 420hp in the Carrera S. The engine in the Carrera/Cabriolet generates 450Nm of torque while the Carrera S peaks at 500Nm. the max torque from both engines is delivered between 1700-5000rpm. The India spec cars will only be offered with the PDK automatic dual-clutch gearbox which helps the Carrera do 0-100km/h in 4.4 seconds. The Carrera S with the same gearbox is three tenths quicker. The Turbo S is powered by a 3.8-litre twin-turbo flat six developing 580hp and 750Nm. It will do 0-100km/h in 2.9 seconds before topping out at 330km/h.

Porsche has also updated the styling of the new 911 by giving it subtle cosmetic changes. The front bumper is brand new with redesigned cooling vents with active air ducts, the head lamps are now projector lamps with LED daytime-running-lights and new 20-inch twin spoke alloy wheels. Porsche has also equipped the 911 with Dynamic Chassis Control and Active Suspension Management for better handling in addition to ceramic composite brakes for added stopping power.

The new 911 also has a new leather upholstery with the new GT sport steering wheel. In addition, Porsche has also fitted an updated PCM infotainment system with satellite navigation with Apple CarPlay and Android Auto.

The brand new 911 is available across all Porsche dealerships across India with the prices at Delhi starting at Rs 1.42 crore and Maharashtra at Rs 1.39 crore.