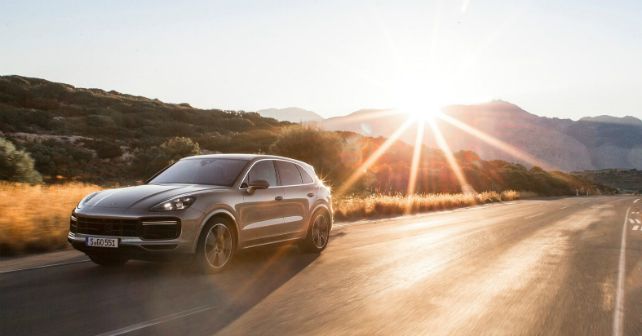 Porsche is set to bring in the new Cayenne on 17th October. Bookings of the Cayenne Turbo had already commenced in May

A year after its global unveiling, Porsche will bring the all-new Cayenne to Indian shores on 17th October. The Stuttgart-based car maker had already commenced bookings of the new Cayenne Turbo in May this year. While the outgoing model had as many as 7 variants on offer, Porsche will only bring in the 2018 Cayenne in 3 variants to start with.

This all-new Cayenne is based on a brand new chassis that has reduced the overall weight of the SUV. In the Turbo variant, it has been plonked with a new 4.0-litre V8 bi-turbo mill that is good for 542 ponies and 770Nm. All of this firepower allows the Cayenne to reach the ton in just 4.1 seconds. The standard variant, however, comes with a more modest 3.0-litre turbocharged V6 mill that pumps out 335bhp and 450Nm. The ‘S’ variant is plonked with a 2.9-litre bi-turbo V6 that develops 433bhp and 550Nm. In the international market, there is also an E-Hybrid Cayenne on offer. Of the aforementioned variants, the Turbo will surely go on sale in October, but there is no confirmation about the other two variants as yet. The E-Hybrid will also be launched in India, but at a later date.

Porsche has mounted the powerplant low into the engine bay which gives it better centre of gravity and thereby improved cornering ability. The Stuttgart-based car maker has also worked on the aerodynamics of the Cayenne – there is a new adaptive roof spoiler that not only gives it an aerodynamic advantage but also increases downforce. And it isn’t all about function. The 2018 Cayenne also sports Porsche’s new design philosophy that we have seen on the Macan. In terms of features and equipment too, the new Cayenne has a lot more to offer than the model it replaces. With that in mind, expect the third-gen Cayenne to demand a premium over the outgoing model.