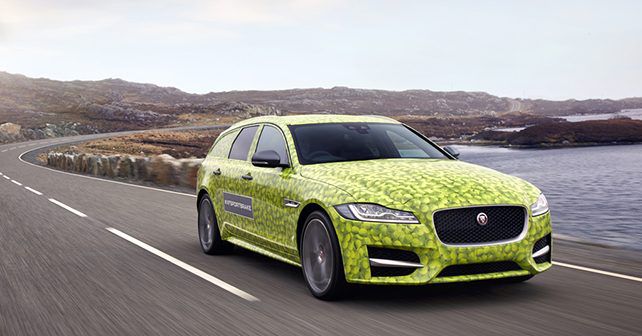 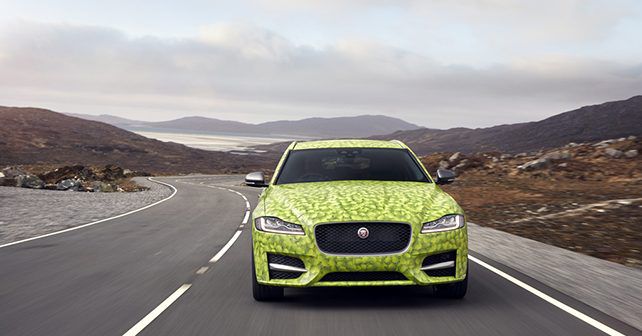 This Wimbledon season, Andy Murray will not only be defending his grand slam title, but he will also unveil Jaguar's gorgeous looking estate. We are talking about the all-new Jaguar XF Sportbrake. As the June 14th launch date approaches closer, Jaguar has decided to put up a couple of new teaser photos of the XF Sportbrake. This also explains why the station wagon's camouflaged under tennis balls printed vinyl wrap.

As expected, till the B-pillar the Sportbrake looks like the XF sedan and then the roof extends further and slopes down. It will also sport a full-length glass panoramic roof. Coming to the rear, the estate will look sleeker than the previous generation model.

According to Jaguar director of design Ian Callum, “With XF Sportbrake we’ve created a silhouette which sweeps towards the rear, almost into the distance, and really gives the car a sense of speed and sportiness. It will bring new levels of practicality to the range without sacrificing the dynamic design and agile handling our customers expect.”

Based on the XF sedan's aluminium-intensive chassis, the Sportbrake will retain the same engine range — 177bhp 2-litre and 296bhp 3-litre V6 diesel powerplants while the petrol range will start from the 237bhp 2-litre and will go all the way to the 375bhp 3-litre V6 Supercharged engine. Like the sedan, the station wagon's engines will be mated to either a six-speed manual transmission or an eight-speed automatic gearbox. It will also be available in either rear-wheel or all-wheel drive.