Next-gen Honda Accord to be revealed on July 14 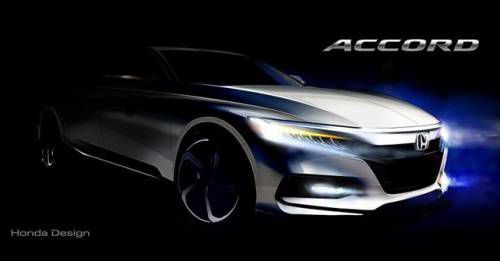 The tenth-generation Honda Accord will be unveiled next month in Detroit.

Ahead of its official debut, Honda has teased a sketch of the upcoming new Accord. The tenth-generation Honda Accord is scheduled to be unveiled on July 14 in Detroit.

In this new-generation Accord, Honda will offer two new four-cylinder engines. The old slow selling V6 will be dropped in favour of modern downsized turbo engines. As a direct replacement for the V6 engine, Honda will offer the turbocharged unit from the Civic Type R. In the new Accord, it will produce 295bhp which is more than the old V6, but less than what you get in the Type R. The engines will come mated with a choice of a six-speed manual, a CVT and an all-new 10-speed automatic developed by Honda.

The new Accord will go on sale in the American market later this year, with its other market launches following subsequently. In India, the current Accord is only offered with the Atkinson-cycle hybrid engine which is brought in as a completely built-up unit. The current generation of the Accord made its way to India back in October 2016. The all-new Accord will take some time to head towards the Indian market even if Honda feels that the demand for the new Accord is sufficient in India.

The sketch revealed by Honda doesn’t reveal much about the car, however, it does suggest that it will be their most "dramatically styled" model yet. Further details on the next-gen Accord will be revealed when it officially makes its debut next month.