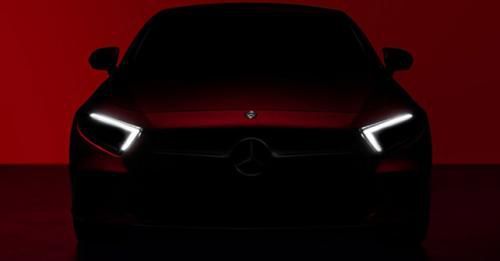 Mercedes-Benz will unveil the third-gen CLS on November 28, 2017, at the LA Motor Show.

Mercedes-Benz has dropped the first teaser of the next-gen CLS. The all-new four-door coupe will be officially revealed at the 2017 Los Angeles Motor Show that kicks off on November 27.

As is with most of the first teasers, there isn’t much that’s been revealed about the car as yet. Mercedes has just shared a picture, saying “The Original Perfected”, which is a reminder that it was Mercedes that kick-started the trend of these fast and swanky four-door coupes back in 2005. Coming back to the picture, it only reveals the front end of the car, but since it’s supposedly a teaser, the lights in the room have been turned off. You can’t really see the shape of the bonnet or anything else, but you’ll notice that it gets all-new inverted L-shaped LED headlights and a single-bar grille.

The next-gen CLS will be based on the same MRA platform that underpins the new E-Class. However, as compared to the sedan, the CLS will sit lower, longer and wider than the E-Class. Four doors or not, it’s a coupe after all. Powertrain options are expected to be same as the E-Class, meaning it’ll have four and six-cylinder petrol and diesel engines on offer, developing power output in the range of 240bhp to 360bhp.

The AMG division will supply engines for the performance versions, of course. Expect the range-topping CLS 63 versions to have the 4.0-litre V8 bi-turbo petrol, while rumour has it that there’ll be a new CLS 53 version as well. The CLS 53 will use a six-cylinder engine.

Expect the new CLS to come with a raft of new features and equipment along with an all-new cabin design. Stay tuned for more details as the car gets unveiled at the motor show in a week’s time.