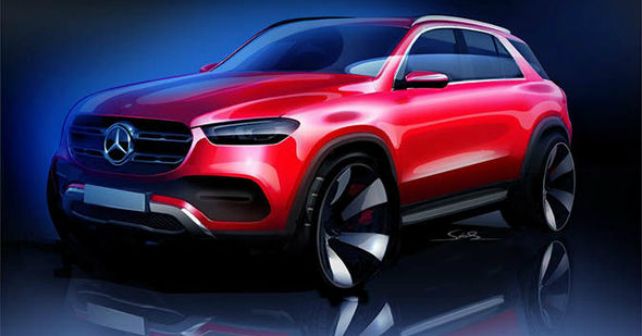 The 2019 Mercedes-Benz GLE will get sharper exterior, newly laid out cabin and added tech.

Mercedes-Benz has just released some teaser images of the upcoming next-gen GLE and GLE Coupe. Both these SUVs are expected to be unveiled at the upcoming Paris Motor Show. The teaser image revealed by Mercedes doesn’t let out too many details. But simultaneously some spy shots of the car have also surfaced, and they give us the clearest perspective about the car so far.

Although the silhouette of the car remains somewhat similar to the model it replaces, a closer look reveals it to be sharper and sportier looking than before. Up front, the GLE now gets a single slat that is positioned over Mercedes’ signature diamond grille. The LED headlights are now sleeker, and there are new wraparound taillights too. Other body parts like the front bumper with the large air dam hint, massive alloy wheels and the twin-exhausts hint that it has been fitted with an AMG body kit.

Images of the interior have leaked in the past and reveal that the GLE will be better equipped than before. There will be a large 12.3-inch display screen for the instrumentation, and a large infotainment screen in the centre. Other features include a three-spoke steering wheel with touch-sensitive controls, electrically adjustable rear seats and the option of having a 7-seater.

The GLE will be based on Mercedes-Benz’s all-new MHA RWD platform. The 2019 iteration is likely to come with a range of four and six-cylinder turbocharged motors – both petrol and diesel. There may be a new plug-in hybrid option as well. Just like the current-gen model, there will be an AMG model too, but it will only be launched at a later date. It is likely to have AMG’s turbocharged V8 that will make about 600 horsepower.

While Mercedes-Benz is expected to reveal the GLE in a months’ time, the AMG-spec version will be unveiled at a later date. The Mercedes-Benz GLE will continue to compete with the likes of the Audi Q7, BMW X5 and the likes.