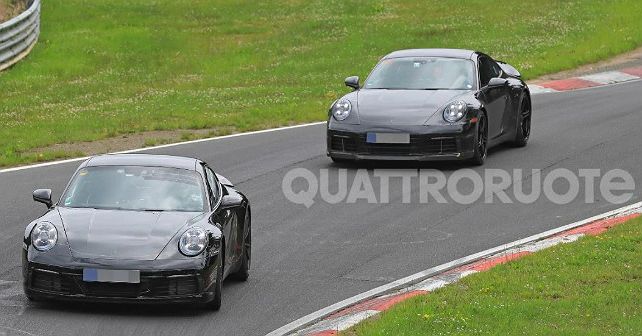 The upcoming 911 Carrera and Carrera S have been spotted with hardly any disguise.

The next-generation of the Porsche 911 (codename 992) has been spotted while being tested on multiple occasions already. This time around, two test mules have been spotted doing rounds of the Nurburgring by our partner Quattroruote.

Because the iconic silhouette of the sportscar remains identical, and the reveal date is not very far away, Porsche did not really bother to put heavy disguise on these prototypes. In fact, the company has just chosen to test black coloured modules with black tape applied to their key elements in order to conceal the new styling.

Despite the familiar face, one cannot overlook the rear of these cars, where all major design changes reside. Like the Panamera, there is a thin horizontal LED strip that grants a fresh look to the rear aesthetics. The exhausts have been moved towards the center of the bumper in a slightly raised position. 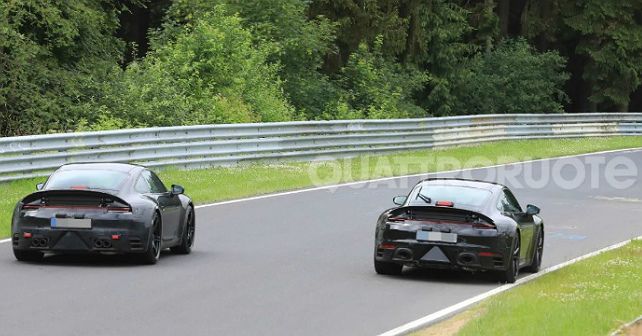 Quattroruote reports that these two models photographed on the track should be the Carrera and Carrera S. The two cars look identical, but the different shape of their exhausts with two and four outlets, respectively, should indicate the different power output of the engine.

Porsche already teased the eighth-generation 911 in February, and it is suspected that the car will be revealed in all its glory towards the end of this year. Official sales of the car should start in 2019. As always, the Carrera and Carrera S will be the first models to be put on sale.

You can read our preview of the next-gen Porsche 911, which includes exclusive renderings of the car by Quattroruote, here.