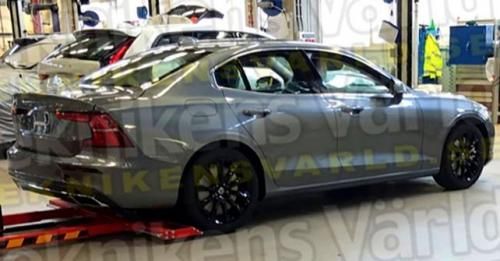 The next-gen Swedish saloon has been partially revealed in an online leak.

While the recently revealed new V60 wagon gave the world a fair idea of what the next S60’s front fascia would look like, the rear styling was a mystery until now. Now that we have a glimpse of the car’s rear third quarter, we aren’t surprised at all.

In line with our expectations, the third-generation S60 adheres to the Swedish company’s latest design philosophy, making it look like a shrunken S90. The rear-end is characterised by C-shaped tail lights, with license plate holder embedded within the trunk lid. Also, it looks like the reflectors will be incorporated in the bumper instead of tail lights.

Otherwise, expect the new S60 carry forward almost everything from its wagon twin, the V60. It will be based on Volvo’s Scalable Platform Architecture (SPA) – same that underpins almost every new Volvo barring the XC40. On the inside, the S60 will be identical to the V60, minus the voluminous boot, of course.

Coming to powertrain options, the S60 is expected to be sold with all 4-cylinder options. So, a 2.0-litre diesel available with 148bhp/320Nm D3 and 188bhp/400Nm D4 options and a 2.0-litre petrol with 247bhp/350Nm T5 and 312bhp/400Nm T6 options will be offered. Additionally, a T6 Twin Engine plug-in hybrid version that’ll combine a 4-cylinder petrol engine with a 65kW electric motor might join the lineup as well.

The S60 is expected to debut globally in coming months and will be the the next major launch for Volvo India after the XC40. The small luxury saloon market is a competitive space, which is mostly dominated by the German trio in India.