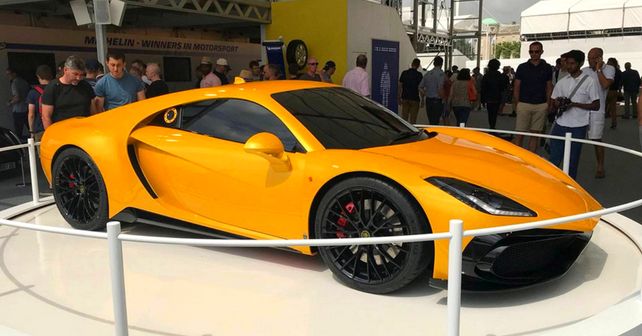 Another Brit supercar arrives in Goodwood.

Noble, a niche British supercar company, has unveiled its new M500 at the Goodwood Festival of Speed. The new M500 will sit below the M600 in the carmaker’s lineup.

Being positioned as the entry level model from Noble, the M500 will be a lot less intimidating and a lot friendlier as an everyday car as compared to its older sibling. Powering the car will be a Ford-derived, twin-turbocharged V6, most likely the same engine that powers the current Ford GT. The Noble M500 is reported to churn around 550 horses at launch, which is over a 100 less than the M600.

Exterior of the M600 reveals a different design philosophy than the M600. It has a funkier face and sharper creases overall, which makes it look more chic when compared to the bold and square lines of the M600.

What is worth noting is that the car shown in Goodwood is not a working model, but an early prototype. It is reported to have no proper interior as of now. Therefore, while the exterior design is more or less final, Noble still has some work to do on the M500 before it reaches showrooms.

Full details of the M500 will be revealed in not so distant future. The car will compete with the likes of the McLaren 570GT, when it will go on sale sometime between late 2019 and early 2020.