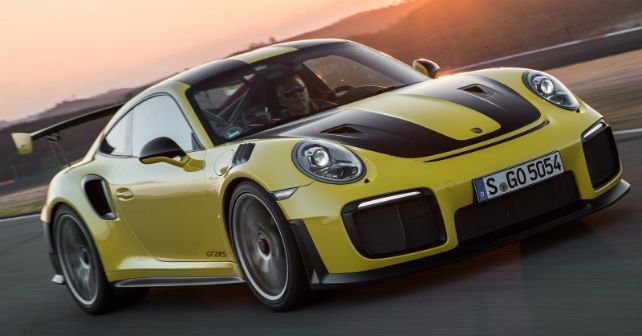 This is the most focused 911 ever made by Porsche and it is priced at Rs 3.88 crore (ex-showroom) in India

Porsche took the wraps off the 911 GT2 RS in July last year. Powered by a 3.8-litre 6-pot bi-turbo motor the 911 GT2 RS is, without doubt, a really fast car. How fast? Soon after the global unveiling, the car challenged the lap record of the legendary Nurburgring circuit and bettered the time of cars like the 918 Spyder and in fact, even its own set target of 7:05.00. The 911 GT2 RS lapped the circuit in a record time of 6:47.30 making it the fastest rear-wheel drive car around the circuit. The 686bhp GT2 RS can do the 0-100km/h dash in 2.8 seconds and record a top-sped of 340km/h.

And it isn’t just the engine that makes the 911 GT2 RS as fast as it is. Porsche has fitted the car with a lot of weight saving materials – the bonnet, front wing, ORVM casings, and the air duct surrounds are all made of carbon fibre. The titanium exhaust that it comes fitted with is 7kg lighter than its predecessor. The 911 GT2 RS also gets a magnesium roof as a standard fitment. Thanks to all these weight-saving solutions, the car tips the scale at just 1,470kg. This gives the car an insane power-to-weight ratio of 466bhp/ton.

This flagship 911 has now been launched in India and carries a price tag of Rs 3.88 crore (ex-showroom). Porsche has allotted more than one unit of this car for India.

The 911 GT2 was first produced in 1995 and was based on the 911 Turbo. The Stuttgart based carmaker brought in the second generation in 2000 and the third in 2007. Introduced in 2010, the first-gen GT2 RS earned the nickname ‘widow maker’ for its mad acceleration and handling prowess. This, second-gen model is even more powerful!