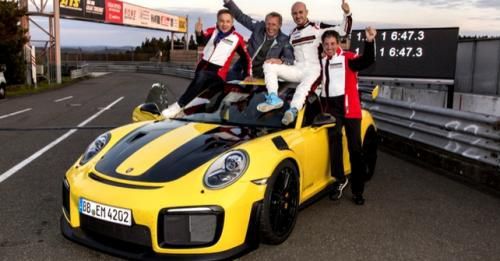 The 911 GT2 RS has officially proven to be the most bonkers machine in the Stuttgart based company’s portfolio.

The Porsche 911 GT2 RS, which made its dynamic debut at Goodwood Festival of Speed in mid 2017, has set a new Nurburgring lap record of 6:47.30 - making it the fastest rear wheel drive road car to do so.

For the record, the GT2 RS has not only surpassed Porsche’s own target time of 7:05.00 by a massive 17.7 seconds, but also outpaced the much more exclusive 918 Spyder hypercar - which lapped the track in 6:57.00. Porsche claims that the GT2 RS was not engineered with the intend of braking the 918’s lap record, but it just happened to do so!

Two GT2 RS cars ran around the Nurburgring to set lap times, one driven by test driver Lars Kern, the other by racing driver Nick Tandy. It was the former who was able to set the better time.

This record puts the 911 GT2 RS 1.4 seconds behind the Nio EP9 - an all wheel drive, all electric hyper car. Fret not if you weren't aware of any such car's existence though. China-based Nio mainly develops race cars for Formula E, and the EP9 is the company’s low production, made to order hypercar.

Coming back to the mighty GT2 RS, the car draws its muscle from a 911 Turbo S derived 3.8-litre, 6-cylinder, boxer biturbo motor. The engine churns out 690 horsepower and 750Nm of peak torque, and propels this machine to 100km/h from a standstill in just 2.8 seconds.

On this achievement, Andreas Preuninger, Director of the GT model line, stated, "It's not just the record time achieved by the GT2 RS that demonstrates the vehicle's caliber, but also the consistency of performance in every lap. We're particularly proud of the fact that this was achieved with two different vehicles and two different drivers, as it underscores the ability of the GT2 RS to reproduce the record over and over again."