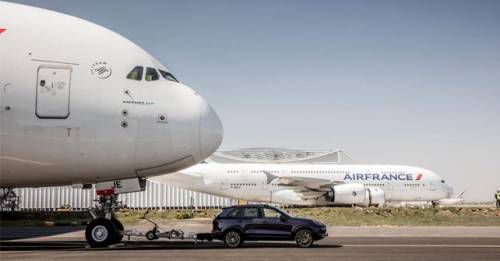 The Porsche Cayenne S Diesel and Turbo S tow an Airbus A380 to claim the "Heaviest Aircraft pull by a Production Car" record.

The Porsche Cayenne has registered itself in the Guinness World Records. How? By towing an aircraft. Actually, it wasn’t just any aircraft – it was a behemoth of an aeroplane that’s known to us as the Airbus A380. The Cayenne pulled the A380 over a distance of 42-metres on a runaway, thereby, claiming the “Heaviest aircraft pull by a production car” record by a margin of 115-tonnes.

The location chosen to carry out the aforementioned stunt was Charles de Gaulle Airport in Paris. The A380 used for the activity was supplied by Air France from its fleet of 10 A380s. The 73-meters long aircraft was first pulled by the Cayenne S Diesel. After having a successful run with the diesel version, Porsche then hooked the aircraft to the backside of a Cayenne Turbo S to see if it can repeat the same. Which, apparently, was also done without breaking a sweat.

As for the record-holding models, Porsche says that the two Cayennes were bone-stock (it was also certified by independent engineers). The only modification they had on the cars was a special towing bar to bear the load of the aircraft. Just in case you’ve forgotten what a stock Cayenne packs, here’s a reminder –  in S Diesel spec, it comes powered by a turbo 4.2-litre V8 that develops 380bhp of max power and 850Nm of stump-yanking, or, in this case, A380 pulling torque. The Turbo S on the other is propelled by a 4.8-litre twin-turbo V8 that churns out 562bhp and an equally impressive 800Nm of torque.

Richard Payne, the Porsche technician who was driving the car, said: “It did it – I’m so relieved! We don’t usually go this far to test the limits of our cars but I think today we got pretty close. I could tell that it was working hard but the Cayenne didn’t complain and just got on with it. My mirrors were quite full of Airbus, which was interesting. Our cars can go a bit beyond what our customers might expect – they’re designed to be tough.”