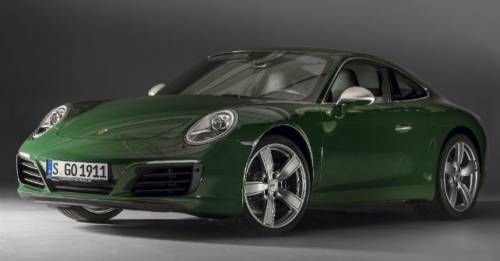 It is indeed a day to remember for Porsche as the one-millionth 911 was rolled off from its production facility in Zuffenhausen. This is no ordinary 911 Carrera S – as it has been draped in an exclusive Irish Green shade and comes with numerous features from the original 1963 911. What’s more, the one-millionth 911 will not go on sale. In fact, it will undertake an epic road trip in the Scottish Highlands, around the Nürburgring, the USA, China and beyond, before returning to enrich the collection at the Porsche Museum.

Dr Wolfgang Porsche, Chairman of the Supervisory Board at Porsche AG, has been a part of the development of the 911 since day one: “54 years ago, I was able to take my first trips over the Grossglockner High Alpine Road with my father. The feeling of being in a 911 is just as enjoyable now as it was then. That’s because the 911 has ensured that the core values of our brand are as visionary today as they were in the first Porsche 356/1 from 1948”.

With it being a major contributor in terms of sheer numbers, the 911 automatically plays a vital role in maintaining Porsche’s position in the world. When it was first launched, the 911 was a segment starter and since then it has gained its reputation to become among the most revered cars in its segment. Last year, Porsche sold 32,365 units of the 911 globally. Porsche takes pride in its quality and claims that more than 70 percent of the 911s they ever sold are still out there on the streets. Aside from being an iconic sports car, the 911 also has a great reputation on the track. As per the official company statement, more than half of Porsche’s 30,000 motorsport wins can be credited to the 911.

The Stuttgart-based sportscar maker says that a lot of the 911’s success story is a result of its state-of-the-art headquarters in Zuffenhausen. Every 911 is delivered in the quality that is a signature of the brand and to achieve that, workers are experts in up to 200 tasks.

Uwe Hück, Chair of the Group Works Council of Porsche AG, says: “I cannot imagine the success story of the 911 without our Porsche employees, who are truly out of this world. The construction of the Mission E at the Zuffenhausen site underlines Porsche’s viability for the future, and it is clear that if we are to make it a success, we will need our highly qualified and motivated employees”.