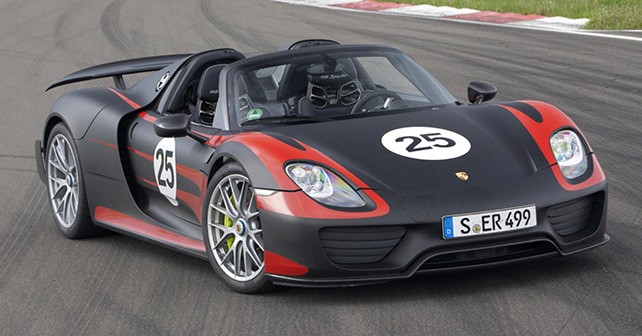 We told you in October last year that Porsche had started the driving trials of the Porsche 918 Spyder and now the company has released pictures and specifications of the soon-to-be-launched hybrid supercar.

A great deal of insight gained from the development of Porsche race cars for the 24 hours race in Le Mans in 2014 is integrated into the 918 Spyder. The entire load-bearing structure for instance is made of carbon fiber reinforced polymer (CFRP) for extreme torsional rigidity.

Under the hood the Porsche 918 Spyder hybrid gets the 4.6-liter, 8 cylinder engine that produces 608 bhp. The engine comes directly from the power unit of the RS Spyder, which explains why it can deliver engine speeds of up to 9,150 rpm. Of course we know it’s a hybrid and this comprises of a 154 bhp churning electric motor and a decoupler that serves as the connection with the combustion engine.

It isn't just this engine's performance but also the sound it makes that stokes the emotionality of the 918 Spyder. The tailpipes or ‘top pipes’ in this case terminate in the upper part of the rear end immediately above the engine. No other production vehicle uses this solution. The top pipes' greatest benefit is optimal heat removal, because the hot exhaust gases are released via the shortest possible route.

All that said its fast, phenomenal around the track and good to look at. What more do you want?