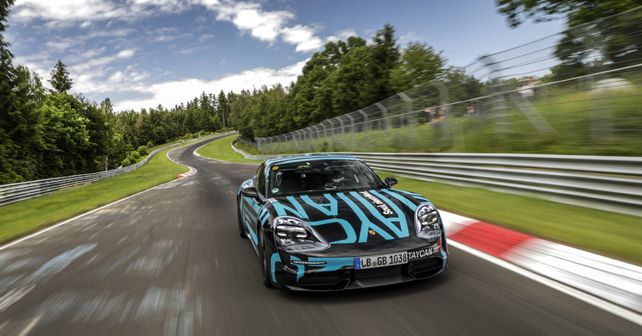 At 7 minutes and 42 seconds, the Porsche Taycan is officially the fastest four-door EV to go around the 20.6km loop of the Green Hell.

The all-new, all-electric Porsche Taycan is demonstrating Porsche's prowess in the field of electric performance cars as a pre-series version has just lapped the 20.6km Nürburgring-Nordschleife circuit in a record time of 07:42.00. With this, the Taycan becomes the fastest four-door EV to go around the famed 'Green Hell'. The feat was achieved with Porsche's test driver Lars Kern behind the wheel. After the record run, Kern stated that he was particularly impressed by the Taycan's handling around the high-speed sections of the track and its linear acceleration out of tight corners.

Porsche says the pre-series Taycan used for the run was the range-topping version which features dual-electric motors (one for each axle). With AWD & all-wheel steering at his disposal, Kern had more than 600 horsepower at his disposal via 21-inch wheels. The Taycan also features something called the integrated Porsche 4D-Chassis Control. This mechanism synchronises all the chassis systems of the Taycan in real-time, like the Porsche Active Suspension Management (PASM), Porsche Dynamic Chassis Control Sport (PDCC Sport) & the Porsche Torque Vectoring Plus (PTV Plus) system. Unlike regular performance EVs, which are powered by a 400V system voltage, the Taycan runs with a system voltage of 800V at all times, further strengthening its credentials of being a hardcore performance EV.

Sharing his thoughts on the Taycan's extreme testing programme, Stefan Weckbach, Vice President (Product Line-Taycan) said, 'Our electric sports car demonstrated the reproducibility of its performance as part of a strenuous test involving 26 successive acceleration runs from zero to 200km/h. Then, it completed 3,425 kilometres within 24 hours in Nardò and now, the record at the Nürburgring-Nordschleife. Numerous factors contribute to this performance. These include the chassis systems that react within a fraction of a second as well as the outstanding aerodynamic.'

The Porsche Taycan will be on display at the upcoming 2019 IAA (Frankfurt Motor Show). However, the Taycan will make its global debut before that, on September 4th. The World Premier will also be live-streamed across the globe.