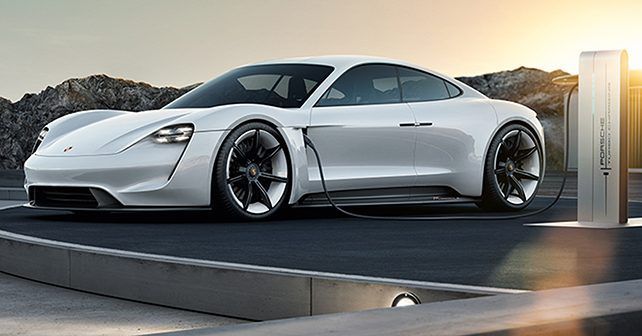 Series production of the first purely electric Porsche is set to begin next year.

Porsche has confirmed that the Mission E concept, in its production ready avatar, will be christened Taycan.

As per Porsche, Taycan can be roughly translated as 'lively young horse', referencing the imagery at the heart of the Porsche crest, which has featured a leaping steed since 1952. Porsche announced the name for its first purely electric series as part of the '70 years of sports cars' ceremony.

'Our new electric sports car is strong and dependable; it’s a vehicle that can consistently cover long distances and that epitomises freedom,' explains Oliver Blume, Chairman of the Executive Board of Porsche AG.

Two permanently excited synchronous motors (PSM) with a system output of approximately 600bhp are claimed to accelerate the upcoming Taycan to 100 km/h in under 3.5 seconds and to 200 km/h in under 12 seconds. The vehicle’s maximum range is over 500km in accordance with the NEDC.

Porsche plans to invest more than six billion euro in electromobility by 2022, doubling the expenditure that the company had originally planned. Of the additional three billion euro, some 500 million euro is claimed to be used for the development of Taycan variants and derivatives.

Furthermore, around one billion euro will be spent for electrification and hybridisation of the existing product range, several hundred million for the expansion of production sites, plus around 700 million euro for new technologies, charging infrastructure and smart mobility.