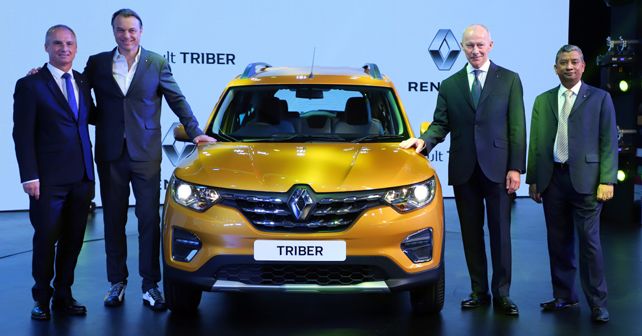 Renault has finally pulled the veil off its latest offering, a model which the company says has been engineered and designed exclusively for the Indian market. Called the Triber (codenamed RBC), this 7-seater from the French carmaker is a little unconventional to put a tag on when it comes to the body style. You see, it is a seven-seater, but, it's not a strict MPV. 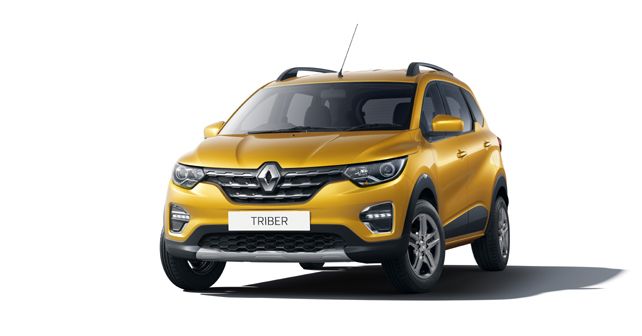 At 3,990mm, the Triber just squeezes into the sub-4 metre segment. It gets its styling cues from the Renault Captur and the Kadjar SUV (sold overseas). The crossover hatch styling has been achieved with a wide stance, a sculpted clamshell bonnet and a rather large bumper which houses dedicated fog lamp slots and the LED DRLs placed neatly above them. The Triber also ditches the modern lighting trend of the main headlamp units being integrated into the bumper, as recently seen on the Hyundai Venue and the Tata Harrier, but it does get projector headlamps. However, the V-shape, triple edge chrome grille and the huge Renault monogram take centre stage and grab the most eyeballs. The front and rear faux skid plates also add a bit of a sporty touch to an otherwise practical and straight-forward design.

As we had informed our readers earlier, the Triber is built on a re-engineered version of the CMF-A platform used on the Kwid. This positions it between the Kwid hatchback and the Lodgy (Renault's proper 7-seater MPV). In comparison to other competitors, the Triber seems to bridge the gap between the Datsun Go+ & the Maruti Suzuki Ertiga. What's interesting about the Triber is that it offers a removable third row of seats, which Renault has dubbed as the 'EASYFIX' seating. The third row can thus be removed in order to expand the Triber's 625-litre boot (with 5-seats up). With all seven seats up, the boot space shrinks down to 84-litres. 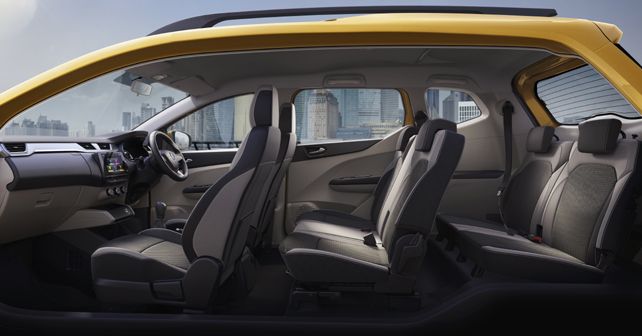 The Triber is powered by a re-tuned version of Renault's BR10 1.0-litre three-cylinder motor which is offered on the Kwid. The power output has been raised from 67bhp to 71bhp and the torque figure sees a gain of 5Nm, reaching up to 96Nm now. The motor will come paired to a 5-speed manual or a 5-speed Easy-R AMT gearbox. Other than this, the Triber rides either on 185/65 R15 tyres or the 165/80 R14 CEAT FuelSmart tyres (on the lower-spec variants). 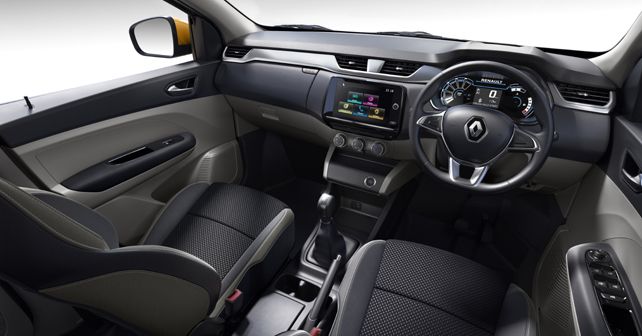 Inside, the Triber offers 31-litres of storage capacity and gets dedicated air-con vents for the second and third-row passengers. Entertainment duties are carried out by an 8-inch multimedia touchscreen powered by Renault's MediaNav Evolution system, which also offers Apple CarPlay & Android Auto connectivity. The driver will be greeted by a fully-digital LED instrument cluster, with an 8.9cm LCD screen surrounded by three virtual gauges for the tachometer, fuel level & engine temperature. The Triber also offers added convenience via a hands-free smart access card, which can lock & unlock the car's doors via proximity sensors.

Well, we've only been shown the car as of now. We'll have to wait for the prices & variant details a few more days. Till then, watch this space for the latest updates on the Renault Triber.