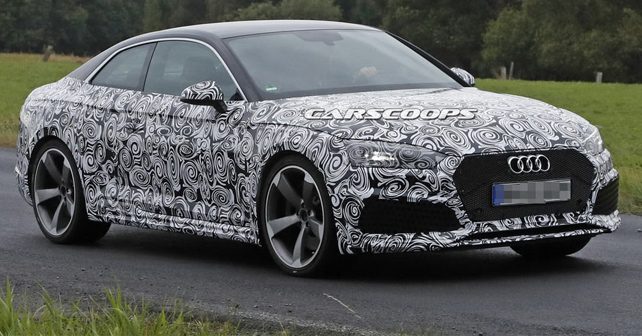 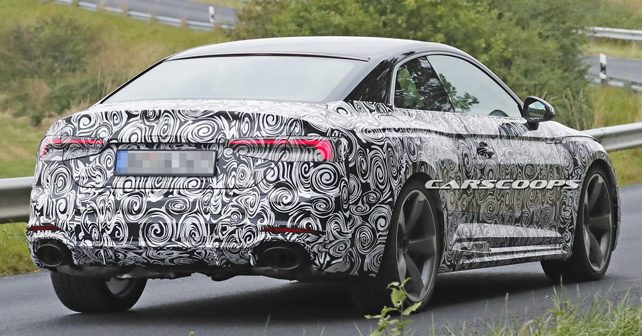 Wraps came off the second-gen Audi A5 and S5 coupe recently. Now, next up is the turn of the full-blown RS version of the svelte coupe. There’s however still some time left before Audi drops the veil on the next-gen RS5. That’s because the performance derivative is currently in the final stages of testing. And, as a result, a test mule of the new RS5 has just been spied in Europe.

As you can see in the pictures above, the front-end of the car features a wider and sportier bumper with large air intakes. Note the flared wheel arches and those tastefully done alloy wheels as well –  hallmark of an Audi RS model. Around the back, the car features two large oval-shaped exhaust openings – again a dead giveaway that it’s an RS model.

While the overall styling looks remarkably similar to the outgoing model, everything on the inside is new now. Including the powertrain – which means the old car’s naturally aspirated 4.2-litre V8 will be replaced by a new smaller, turbocharged engine. As of now it’s believed that it will come with the company’s turbocharged 3.0-litre V6 developing close to 450bhp-480bhp. Some reports also suggest that it may be powered by Porsche’s new 2.9-litre V6 motor that made its debut with the new Panamera. Regardless of which powertrain it comes fitted be though, power will be sent to all four wheels via Audi’s quattro AWD system.

When launched, the Audi RS5 will compete against the usual suspects – the Mercedes-AMG C63 and BMW M4.