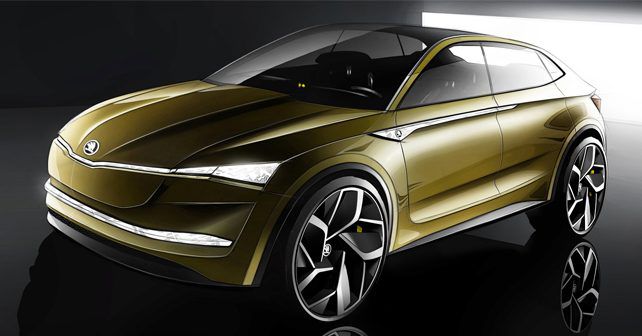 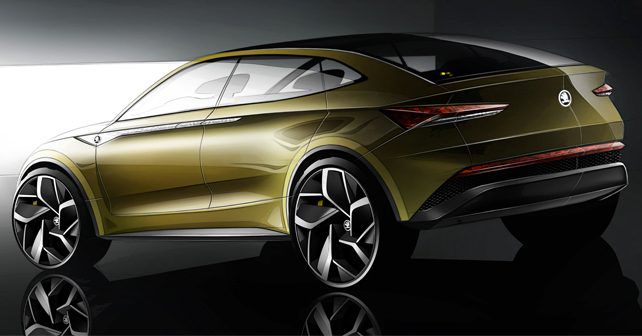 Skoda's first ever all-electric vehicle previewed in the form of the Vision E concept. Five all electric Skoda vehicles to go on sale by 2025.

This is the Skoda Vision E concept – the first-ever “purely” electric and autonomous show car by the Czech firm. As per Skoda, the Vision E is a five-door SUV coupe that will have a range of 500 kilometres while it also meets level 3 requirements for autonomous driving (more on this later). Skoda has also announced that it will be launching five purely electric vehicles across various segments by 2025. Some serious plans, wouldn’t you say?

The Skoda Vision E is underpinned by Volkswagen group’s MEB platform for electric vehicles. Now while the Vision E is still a concept car, it looks quite amazing, to say the least. The short overhangs and sloping roofline coupled with butch looks give it an intimidating stance. Dimension wise, it’s big too – it’s 4,645mm long, 1,917mm wide and 1,550mm tall. The long wheelbase of 2,850mm means it will be spacious on the inside – or so claims Skoda.

The other highlight of Skoda’s electric concept is that it’s going to be an autonomous vehicle as well. Skoda says that latest surveys suggest that around 15 per cent of all new cars are likely to be driving completely autonomously by 2030, so it’s one area that they could no longer ignore. As a result, the Vision E concept achieves level 3 autonomous driving. What that means is that the car “can operate independently in traffic jams, go into autopilot on motorways, stay in lane and swerve, carry out overtaking manoeuvres, independently search for free parking spaces and park and leave parking spaces alone.”

Skoda will launch its first purely electric vehicle based on this concept after 2020. The first electrified vehicle from the company will come out in the shape of the Superb plug-in hybrid in 2019, confirmed the firm.

The Skoda Vision E concept will make its debut at the upcoming 2017 Shanghai Motor Show that kick starts on April 19.