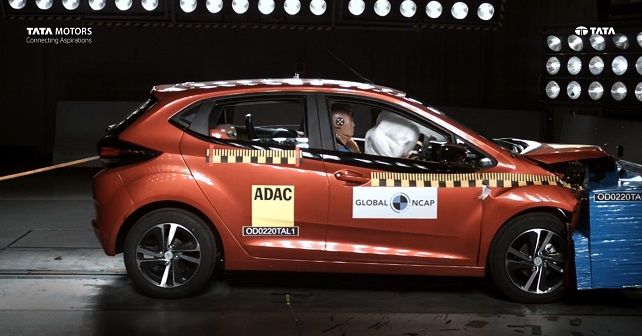 The Tata Altroz has scored full five stars in Global NCAP crash tests before its market launch. This makes it the second made-in-India car to receive a 5-star rating after the Tata Nexon.

Tata’s brand-new premium hatchback, the Altroz, may not have reached the showroom floors as yet, but it’s already been to the Global New Car Assessment Programme (Global NCAP) crash test lab. And its performance there has been nothing short of extraordinary, as the Altroz has been an awarded a full 5-star rating in crash tests!

With a 5-star Global NCAP rating, the Altroz is the second made-in-India car after its sibling, the Nexon, to have scored a full five stars in the crash tests. Also, this is the first time that NCAP has crash tested a vehicle before its market launch. In any case, this will definitely help boost the Altroz’ chances to lure car buyers in the country, for safety is now one of the top priorities for Indian consumers.

The Altroz scored 16.13 points out of 17 in adult occupant category, which helped it score full five stars. In child safety, the Altroz scored 3 stars out of 5 as it scored 29 points out of 49. The Altroz was tested for both front offset and side-impact test. According to NCAP’s report, the hatchback offered good protection to the driver and passenger’s head and neck, while chest protection was also adequate. The bodyshell was rated as ‘stable’, and NCAP test results showed that it was capable of withstanding ‘further loadings’. The Altroz that was crash-tested was fitted with dual-airbags and ABS with EBD, which are going to be standard fitments in the car upon its launch.

The Tata Altroz will be launched in India on January 22, 2020. The hatchback will be offered with BS6-compliant petrol and diesel engines. This includes a 1.2-litre three-cylinder naturally aspirated petrol and a 1.5-litre turbo four-cylinder diesel. The former is rated at 86bhp and develops 113Nm of torque, while the latter produces 90bhp and 200Nm. Both the engines will come with a 5-speed manual gearbox as standard, albeit a dual-clutch automatic gearbox will also be offered in the future.

The Tata Altroz will compete with the likes of Maruti Suzuki Baleno, Hyundai Elite i20, Toyota Glanza, et al. However, the Altroz is expected to be launched with an aggressive price-tag, ranging between Rs 5 lakh and Rs 8 lakh (ex-showroom), meaning it'll be priced slightly lower than its rivals.