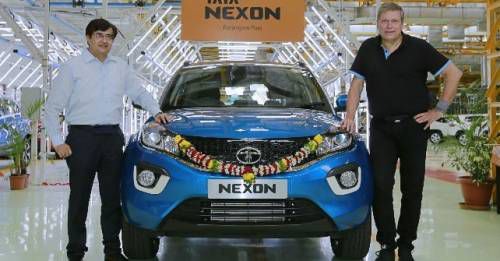 First showcased as a concept at the Auto Expo 2016, the Tata Nexon compact SUV has managed to generate quite a hype, all thanks to its funky design inside and out. The car has been a long time coming in its production avatar, and now finally Tata Motors has flagged-off the first batch of Nexon from its production facility in Ranjangaon.

Just a few days ago, Tata officially announced the powertrain options which will propel the upcoming sub 4-metre SUV. The Nexon will get a new 1.2-litre three-cylinder Revotron petrol motor that is good for 108bhp of power and 170Nm of torque. This is essentially the same engine that we have experienced on the Tiago but has been fitted with a turbocharger.

The diesel too is a derivative of the Tiago’s 1.05-litre unit but in the Nexon, Tata has added another cylinder that increases its displacement to 1.5-litre. The turbocharged diesel motor also produces 108bhp but torque rating is higher at 260Nm. A 6-speed manual gearbox will be standard across both engines.

The Nexon’s design language is based on Tata’s Impact Design philosophy, which gives it imposing and wide front end, but a nice coupe-esque profile. The insides of the compact SUV are all new too, and Tata is likely to offer customisable panels for the dashboard.

Given the fact that the car is already in production now, the launch should not be far off. The Nexon will compete with Maruti Vitara Brezza, Ford EcoSport, Honda WR-V and Mahindra TUV300 in the ever growing sub 4-metre crossover segment.