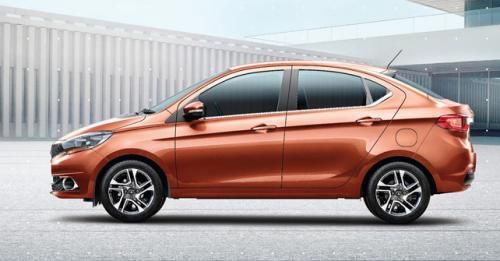 Tata Motors rolls out AMT-equipped variants of the Tigor. Only available in petrol though.

When Tata Motors launched the Tigor earlier this year, the compact-sedan was only launched with a manual transmission. Given the fact that automatic cars are rapidly gaining popularity among the masses these days, it sure was a lost opportunity. However, Tata Motors has been quick to realise this as the firm has now launched AMT-equipped variants of the Tigor.

The Tigor AMT is available in two variants, namely –  XZA and XTA – available only in petrol. The XTA variant is priced at Rs 5.75 lakh and the top-end XZA has a sticker price of Rs 6.22 lakh. Both prices are ex-showroom, New Delhi.

Since the AMT is only available in petrol, it’s propelled by the same 1.2-litre three-cylinder engine that develops 83bhp and 114Nm. The AMT unit will be based on the same 5-speed manual transmission as of the regular model but there’s, of course, no clutch pedal. The gearbox will have four gear positions – Automatic, Neutral, Reverse and Manual. It also has a Sports mode. The Tigor AMT also comes with an in-built ‘creep’ feature.

Commenting on the launch, Vivek Srivatsa – Head - Marketing, Tata Motors’ passenger car unit, said – “Given the current traffic scenario and growing driver fatigue levels, an AMT is the perfect solution to bringing back the joy of driving in a city, without compromising on fuel efficiency. As per our turnaround strategy, we are working with a renewed focus and energy to improve our market share and bring products that align with customers’ aspirational and practical requirements.”

The Tata Tigor AMT will mainly compete against the Maruti Suzuki DZire AGS (also AMT), albeit the latter is available in both petrol and diesel variants. That said, the Tigor AMT is significantly more affordable than the DZire AGS.