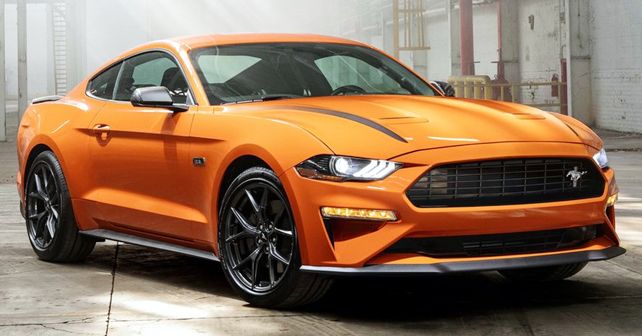 The Ford Mustang was introduced to the world on April 17th 1964, and this year marks the 56th anniversary of the iconic sports car. Last year, the Ford Mustang improved its sales outside of the US market and became the world's best-selling sports car.

When the American car manufacturer unveiled the Ford Mustang to the world 56 years ago, it was an immediate success. Designed by the legendary car designer Lee Iacocca, the Mustang created the 'pony car' class segment in the US market. Within the first year itself, Ford managed to sell 400,000 units of the car, reaching the million mark in just two years. The starting price for the Mustang at that time was just over $2,000 (Rs 1.5 lakh).

Now, 56 years later the Mustang is one of the most iconic muscle cars to have ever been produced, and it has attained cult status. Last year Ford sold 102,090 units of the car, making it the best selling sports car in the world and also the best selling sports coupe in the last five consecutive years. While it's true that the vast majority of these sales come from the US market alone, it is also important to keep in mind that the demand for the Mustang has grown all across the globe. The Mustang is now sold in 144 countries in both LHD and RHD variants.

Countries like Germany saw a 33 per cent increase in the Ford Mustang sales in 2019, while France and Poland saw a 50 per cent increase. The sixth-generation Mustang has already sold over 600,000 units since it was launched in 2015. Although sales of the Mustang grew in the EU by 3 per cent in 2019, back in the domestic US market, sales dipped by more than 4 per cent.

It seems that this year will not be as successful for the pony icon, as the coronavirus pandemic has slowed down the entire world. Ford's factory in Flint Michigan, where the Mustang is produced, has been shut down, and it looks like things won't change for quite some time now. Ford in the meantime is busy manufacturing medical equipment for the US, and it seems all further car projects will be on standby. Nonetheless, it is safe to say the legacy of the Ford Mustang will live on, and there are also rumours of a new Mach 1 in the prototype phase. Development of the superfast and powerful Mustang Mach 1 is currently underway. It was previously launched in 2004. Back then it came with a 4.6 litre V8, however, it is still not clear what the future Mach 1 will get.