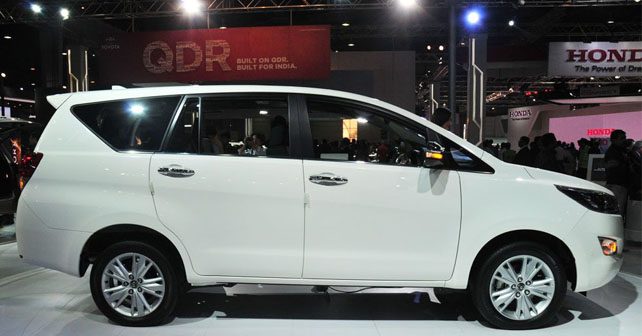 After unveiling the all-new Innova Crysta at the Auto Expo, Toyota is reportedly going to commence bookings of the new model in March 2016.

Toyota unveiled the all-new Innova Crysta at the recently concluded 2016 Delhi Auto Expo. It has now been rumored that the bookings of the new Innova will commence soon. As per a dealer in Delhi/NCR, the Innova Crysta will go on sale in July 2016, while bookings will open March onwards.

The Toyota Innova is an undisputed champion in the MUV segment in the market. It’s also perhaps one of the only vehicles in the country that is as popular among private car owners as it is with fleet car operators. With the Innova Crysta, Toyota is all set to move the game further forward as it features all-new interiors, contemporary styling and comes powered by an all-new diesel powertrain among other improvements.

Toyota will offer the Innova Crysta with a brand new 2.4-litre turbo diesel engine that develops 146bhp of max power and 342Nm of peak-torque. The engine will come mated to a 5-speed manual transmission. A 6-speed CVT automatic transmission will also be offered, although it will generate slightly higher torque of 358Nm. As per reports, Toyota is also contemplating a petrol engine for the new Innova in view of Delhi government’s ban on diesel cars powered by engines bigger than 2.0-litres of cubic capacity.

Among other highlights of the new Innova, it will have projector headlamps, LED interior mood lighting, a 7-inch infotainment screen, automatic climate control, keyless entry, reversing camera etc. Compared to the currently sold model, it’ll have more plush interiors and will come equipped with a raft of creature comfort features.

The Toyota Innova Crysta will be manufactured at the company’s manufacturing base in Karnataka. Considering the prices of the current Innova, the new model is expected to be priced between Rs 13 lakh and Rs 17 lakh.