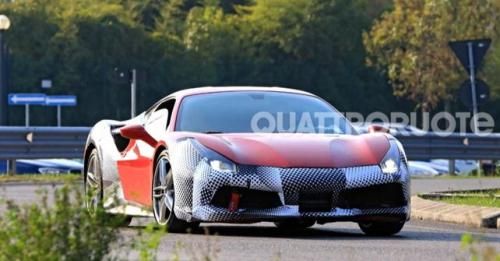 Officially, Ferrari has been tight-lipped about the development of a more powerful 488 – but these spy pictures clearly say a lot.

Our partner, Quattroruote, has managed to take spy shots of a lightly camouflaged version of the Ferrari 488 GTB – which is likely to be called the 488 GTO.

If rumours are anything to go by, the 488 GTO is being engineered to be a more powerful and hardcore version of the 488, which will prioritise track performance – just what the 458 Speciale was to the 458 Italia.

The test prototype of the upcoming supercar has its certain parts camouflaged, thus drawing our focus on the updated areas. The shape of the bumper is very similar to the GTB’s and no additional aerodynamic appendages are visible. Also, the alloy rims are the standard ones. The rear bumper and exhausts are still those of the GTB, but the two holes in the rear bumper with plastic caps are new. 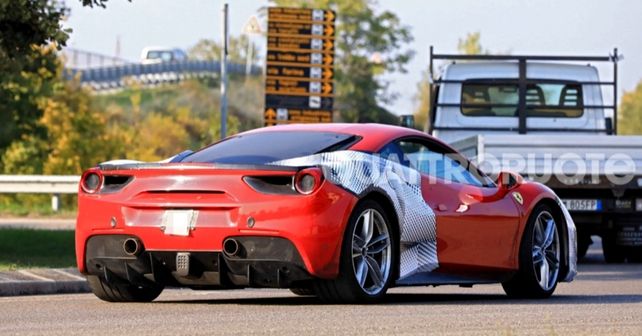 External and aesthetic enhancements aside, the real upgrade of the GTO is going to be its updated internals. Ferrari is expected to inject more muscle into its twin-turbo V8 – making it pump a rumoured ~700bhp. For comparison, the very same motor churns out 553 horses in the 488 GTB. Obviously, torque figures will witness a rise as well. Industry rumours also suggest that Ferrari might electrify the GTO to achieve these higher figures.

Track-focused versions of supercars highly prioritise weight savings – and the GTO is not expected to be any different. Considering what Ferrari did with the 458 Speciale and the fact that the GTO will be more advanced than it, expect the GTO to get no sound insulation for the engine bay, lighter brakes and wheels, thinner windscreen and windows and probably even more.

For now, we can expect the Ferrari 488 GTO to be revealed in all its glory sometime during the first half of 2018.