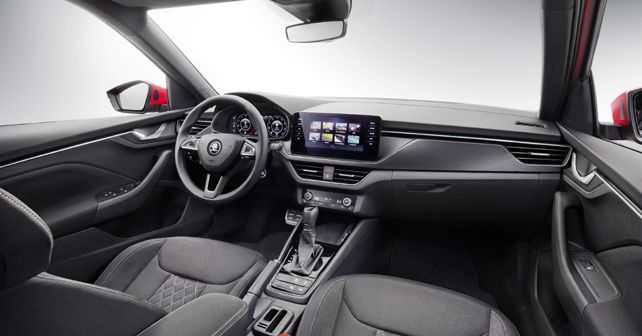 Prior to the car's debut at the upcoming Geneva Motor Show, Skoda has released the first-ever image of the Kamiq's interior, highlighting the key details. Further, the official boot volume and wheelbase figures are also out.

Days before the world premiere of the new Skoda Kamiq at the Geneva Motor Show, Skoda seems to have started dropping teasers of the car in order to build excitement around its debut. Recently, Skoda also let us in on the Kamiq's exterior design by releasing its official design sketches.

The interior of the Skoda Kamiq has been inspired by the Vision RS Concept and it will be Skoda's second model to feature the brand's new interior layout. While the freestanding centre touchscreen is surrounded by a character line which, according to Skoda, reflects the lines of the bonnet, the line itself also acts as a resting surface for the operating hand. With the optional Virtual Cockpit, the Kamiq gets a 10.25-inch instrument display which is by far the largest display on offer in its segment. Also, the side air vents protrude into the door t make the dashboard look bigger and wider.

The instrument panel, along with the front door panels has been finished in a high-quality, soft-foam material which features a crystalline-structure grain, something which Skoda says will define its upholstery styling endeavours in the future. Talking of premium finishes and features, the Kamiq's aesthetic appeal will also be enhanced by interior ambient lighting, which will be available in three colour options: Copper, Red or White. Additional convenience bits and bobs include a heating option for the windscreen, rear seats and the steering wheel.

Built on Volkswagen's Modular Transverse Matrix (MQB) platform, the Kamiq offers a wheelbase of 2,651mm and a generous boot capacity of 400 litres. With the rear seats folded, the trunk space can be increased to 1,395mm. These figures remind us of the Volkswagen T-Cross, which is also built on the same platform as the Kamiq.