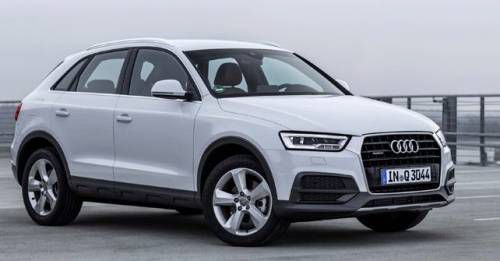 The refreshed Audi Q3 is available in two variants including a front-wheel drive version.

Around September last year, Audi gave the Q3 a mild makeover for global markets. And now it has just launched the same for the Indian market. However, in India, the new Audi Q3 will be available in two variants -2.0TDI FWD and 2.0TDI quattro. The former is priced at Rs 34.20 lakh and the latter at 37.20 lakh (both ex-showroom, New Delhi.)

Exterior updates on the new Q3 are a hit-and-miss affair. Still, if you are interested to know, it gets a redesigned bumper with revised air inlet design. Other than that, it remains virtually unchanged. As for other stuff, the Audi Q3 now comes fitted standard with LED headlights, a panoramic sunroof and 17-inch alloy wheels. On the inside, both front seats now come with electric adjustment as standard. The more expensive quattro variant also features aluminium tangent inlays while the front-wheel drive version gets walnut brown inlays. Dual-zone air conditioning is standard, too.

Both the versions come powered by a 2.0-litre turbo diesel engine, albeit in different states of tune. The front-wheel drive variant develops 148bhp and 340Nm of torque. The quattro all-wheel drive variant develops 181bhp – a 4 percent bump in power over the outgoing car – and 380Nm of torque. Power transmission duties in both the variants are carried out by a 7-speed dual-clutch automatic transmission. Audi claims it has been revised to return a higher fuel efficiency than before.

The Audi Q3 competes against the likes of the BMW X1 and Mercedes-Benz GLA in the Indian market.

The refreshed Audi Q3 is the third launch of 2017 by the firm in India. The company plans to launch seven more products this year across different segments.