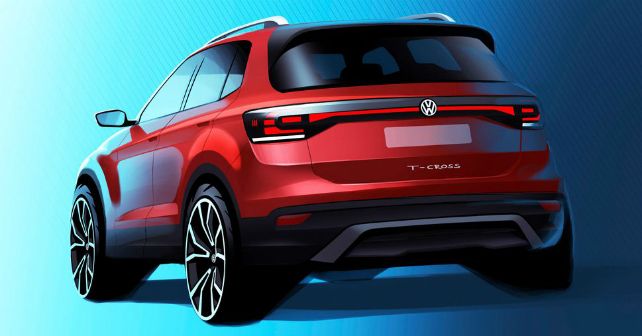 The German carmaker releases some sketches of the T-Cross giving us a glimpse of what to expect.

It has been more than two years since Volkswagen took the wraps off the T-Cross Breeze concept at the Geneva Motor Show. We have known all this while that the concept could be the base for a compact SUV from Volkswagen. Now, it seems that the German carmaker will soon be ready to showcase the production version of the T-Cross. But before we get a closer look at what the production version of the T-Cross SUV looks like, Volkswagen has decided to give a glimpse of what it could be like.

Volkswagen has now released a teaser image and video of the upcoming T-Cross. When launched this will be the smallest SUV to roll off the VW lines. In fact, at 4,107mm it is just 54mm longer than the latest generation Polo hatchback. As far as design is concerned, the T-Cross shares the same cues that we have seen on the larger T-Roc and Tiguan. In fact, the typical high-set bonnet, flared wheel arches, roof rails and the high ground clearance can all be noticed on the T-Cross too. Up front, the compact SUV looks identical to the concept it is based on. Up front is the wide grille and the bumper will continue to house the square-ish fog lamps. If the sketch is anything to go by, the T-Cross will look its best from the rear thanks to those connected taillamps.

Just likes most of the newer Volkswagen offerings, the T-Cross too will be based on the MQB platform. The compact SUV, however, will be based on the A0 subset that also underpins smaller cars like the Polo hatchback. Interestingly, Volkswagen Group is looking to localise this platform in India in the near future. Does that mean that the Volkswagen T-Cross will be making its way to India too? Possibly.