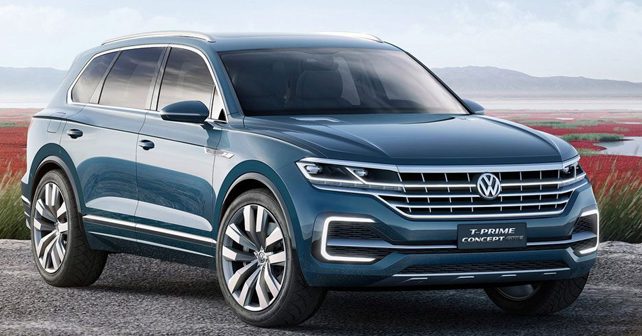 Volkswagen has dropped the veil on its latest SUV concept, which was teased a couple of days ago. Called the T-Prime GTE, the concept is believed to preview the company’s next-gen Touareg.

Of late, Volkswagen has been seen focusing more on electrified vehicles (diesel-gate aftereffect, perhaps?) and the T-Prime GTE echoes the same thoughts. It features a plug-in hybrid drivetrain that combines a 2.0-litre turbocharged petrol engine and an electric motor. In conjunction, the system develops 375bhp of power and 700Nm of peak-torque. Power is sent to all four wheels via an 8-speed automatic transmission.

The T-Prime GTE concept is underpinned by VW Group’s latest MLB platform, meaning it will feature a lightweight structure. In concept form, the SUV measures 5,069mm long, 2,000mm wide, and 1,708mm tall. Despite its size, the SUV will be a 4-seater, although it’s brimming with all the latest bells and whistles on the inside.

To name a few gadgets, it has a 15.0-inch touchscreen display featuring gesture support and capacitive switches. Interestingly, the transmission is operated by wire from a glass scroll wheel. The steering wheel does away with conventional multi-function switches and replaces it with touch controls. Rear seat occupants get a 10.1-inch tablet type screen each along with a 9.6-inch display screen in the centre to adjust climate controls and seat adjustments.

Volkswagen has confirmed that it will expand its crossover range by adding more products in every relevant segment of the market. The first product to come out of its new SUV range is the new Tiguan, which will also be offered with extended wheelbase in certain countries (India could be one of the markets). Following that, it will launch the next-gen Touareg. Below these vehicles, there will be two more new SUVs - one based on the Golf (T-Roc concept) and the other will inspired by the Polo (T-Cross Breeze concept).