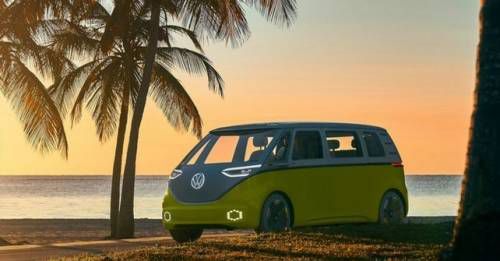 The target markets of the I.D. Buzz would be North America, Europe and China.

Unveiled at the Detroit Auto Show 2017, the Volkswagen I.D. Buzz concept has been given green signal by the German company to go into production. The vehicle is expected to go on sale sometime in 2022.

And just like the concept car, the production model will also have its batteries mounted in the vehicle floor. Because the electric drive components - electric motor, power electronics, and such - don't take up much space, the vehicle has a long wheelbase with short overhangs, allowing for a massively spacious interior and great proportions.

Don’t let the boxy shape fool you though. The I.D. Buzz concept produces upwards of 360 horsepower equivalent, and can sprint from 0-100 km/h in less than 5 seconds! The vehicle also features an all-wheel-drive setup for added traction. The batteries that propel the I.D. Buzz concept can take you about 435km before maxing out.

Although Volkswagen's oldest and newest Microbuses will be separated by more than seven decades when the new model is launched, the I.D. Buzz undoubtedly has the original's genes - as it offers maximum utilization of space on the footprint of a mid-size passenger car.

Based on the new all-electric architecture, the production version of the I.D. BUZZ will incorporate many design ideas from the concept car, including multi-variable seating, interactive connectivity and highly automated driving.