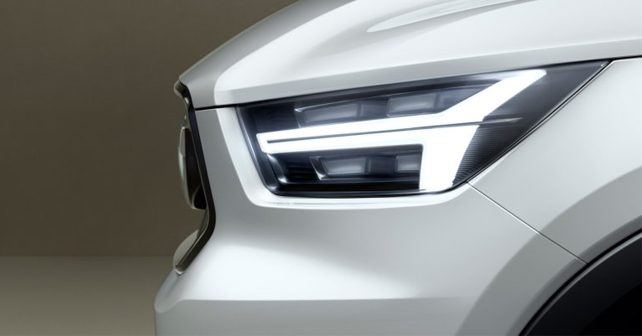 Volvo has revealed a teaser image of a new concept model, which is most likely the company’s new compact XC40 SUV. The Swedish auto maker released the teaser via Snapchat saying ‘Not your daddy’s Volvo’. That sort of suggests that it’s going to be trendy as well as a relatively affordable Volvo. Official reveal of the new concept will take place within a week’s time.

The image reveals a front-end design that’s reminiscent of the XC90, featuring Volvo’s signature “Thor’s Hammer” LED DRLs. While Volvo has not confirmed the identity of the new concept, it has reportedly confirmed that the new concept will be part of the company’s new 40 Series.  In fact, some reports also suggest that Volvo will reveal two new concepts on the same day – most likely the XC40 and new V40. Both the models will be underpinned by the company’s Compact Modular Architecture (CMA).

Under the hood, expect the new models to feature Volvo’s current range of three- and four-cylinder Drive E turbocharged petrol and diesel engines. A plug-in hybrid powertrain could also be introduced.

Volvo will reveal the new 40 Series concept next week. As per current speculations, the XC40 compact-SUV will go on sale around the second half of 2017. The new V40 hatchback is expected to go on sale by the end of 2016 in major global markets.

The XC40 will compete against the likes of the Audi Q3, Mercedes-Benz GLA and BMW X1, which means there’s a strong chance that it will come to the Indian market soon after its global launch. The V40 is already on sale in India, meaning the new model will also be brought to our shores once it hits the road of major European markets. As for 2016, Volvo is expected to bring the new S90 sedan in the Indian market sometime around the second half of the year.