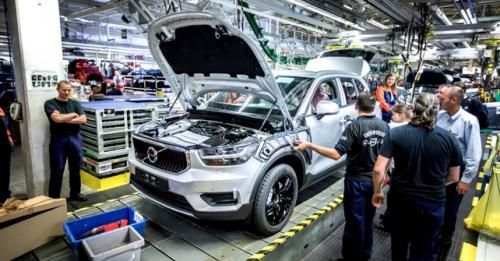 Volvo claims that it has already received over 13,000 orders globally for the XC40, and the first customers can expect to take delivery of their cars during Q1, 2018.

Volvo has commenced the production of its smallest SUV, the XC40, at its plant in Ghent, Belgium.

Preparations for the production start of the XC40 in Ghent have been ongoing for a long time. Considerable investments in recent years have transformed the Ghent plant into a global export hub for the corporate’s Compact Modular Architecture (CMA) based cars, including an 8,000 square metre addition to the body shop.

The XC40 is underpinned by Geely’s new CMA platform. This platform will be extended to Geely’s other brands as well, most notably the Chinese company’s newly established Lynk & Co. marquee. The CMA platform aims to provide Volvo Cars with the necessary synergies and economies of scale for the small premium car segment.

Under the hood of the XC40, three petrol and two diesel engines, all 4-cylinder, are offered - with power ranging from 150bhp - 250bhp. An 8-speed automatic transmission is paired with all the engines, and the more powerful motors get all-wheel-drive as well.

Volvo anticipates that the luxury small SUV sales will surpass one million globally by 2020, and believes that XC40 is a step in the right direction to tap into this market. The Volvo XC40 is India bound, and we expect Volvo to launch it here in the first half of 2018. Meanwhile, Volvo is speculated to launch the XC40’s bigger brother - the new XC60, in India before the end of 2017.

When launched in India, the Volvo XC40 will go against Audi Q3, BMW X1, and Mercedes-Benz GLA.