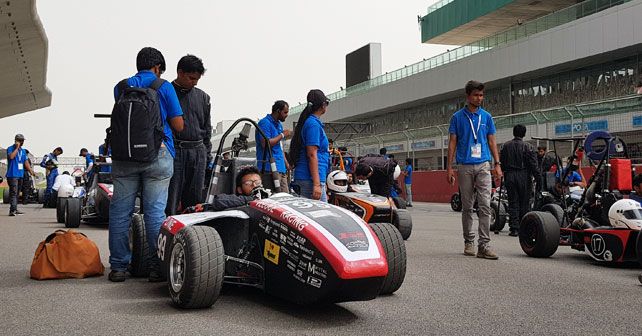 Over 3,000 students from 112 teams competed in the Maruti Suzuki Supra SAEINDIA competition this year, showcasing their finesse in engineering in their formula race cars.

Maruti Suzuki Supra SAEINDIA is an intriguing college-level competition that provides enthusiastic automotive engineers with an opportunity to put their prowess into a working model. This year was the seventh edition of Supra, which took place at the Buddh International circuit in Greater Noida from June 11 – 16th.

Over 3,000 students from 112 teams competed in Supra SAEINDIA this year, trying to put all of their engineering finesse into their formula race cars. Their vehicles were then judged by a group of 100 judges, which comprised of various motoring experts, including the Formula 4 race driver Sneha Sharma.

Even though the maximum engine displacement was capped at 610cc, interestingly, a majority of race cars that made it to the final round were powered by the KTM 390 powertrain. On inquiring the reason behind the same from student engineers themselves, we learnt that most of the students appreciated KTM’s engine for its lightweight, thereby making it their choice of propulsion.

A stringent evaluation of the race cars was made based on various static and dynamic tests, which included parameters like performance, design, braking, safety, etc. Eventually, 27 teams were shortlisted for the final endurance run, which was divided into 2 rounds, each containing 14 and 13 cars, respectively. A total of 10 laps were raced in each round, however, drivers were required to be switched after 5 laps. Ultimately, it was Team 73 Kratos Racing from Pimpri Chinchwad College Of Engineering, Pune, which came out on top for the third consecutive year!

I V Rao, Executive Advisor, Engineering & Director, Maruti Centre of Excellence at Maruti Suzuki said, “Maruti Suzuki has been trying to establish a connection with the engineering students, because if the students know how the industry operates, it would help them when they actually join the industry”.

Hurdles or heat did not deter these budding engineers from giving out their best at this year’s Supra. Maruti Suzuki has been the title sponsor of Supra SAEINDIA ever since its inception in 2011, and the event has always witnessed a growth year on year. While its great to see students showcase such high level of innovation, providing them with an ideal platform to showcase their skills is very important as well, and that’s where Maruti Suzuki is helping nurture young talent.

The zeal shown by students towards Supra proves that our country isn’t short of talented engineering students, the Maruti Suzuki Supra SAEINDIA is just the kind of proving ground to put their abilities to the test. It’s one of a kind event ultimately generates capable engineers, which is a positive sign for the automotive industry.

“7th Edition of Supra SAEINDIA 2018 has been a phenomenal experience with the participation of over 3,000 students. While the engineering students showcased their skills to the judges, we were delighted at the high enthusiasm towards automobile engineering. Maruti Suzuki has always focused on strengthening its connect with the youth to shape and encourage their skills in automotive technology. Through our association with Supra SAEINDIA we provide a robust and comprehensive platform to these budding engineers to follow their passion for automobiles,” said, C.V.Raman, Senior Executive Director, Engineering, Maruti Suzuki.

“We are confident that this exposure will further ignite the mind of young engineers for contemporary automotive technology. Competitions like SUPRA SAEINDIA prepare the youth to create innovative ideas and handle challenging assignments in their career,” he further added.