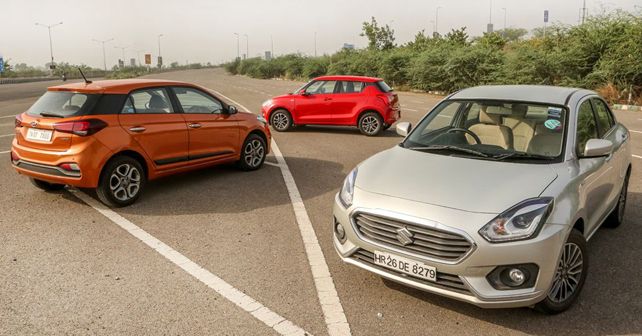 Despite the huge cloud of uncertainty overcasting the market in the last few months, the Indian car manufacturers have been registering inspiring sales numbers leaving them to close the first quarter of the 2018-19 financial year on a high.

Being the market leader by a huge margin, Maruti Suzuki registered a growth of 24.5 per cent with a total 1,35,662 units sold domestically. With domestic sales and exports combined, Maruti pushed out 1,44,981 units in June 2018 to register a growth of 36.3 per cent. As for the first quarter of the fiscal, with a total of 4,90,497 units sold in the domestic and export markets, Maruti Suzuki grew by 24.3 per cent.

Hyundai, the second largest car manufacturer in India has also witnessed a rise in sales as it sold 45,371 cars domestically, in addition to exporting 15,408 units. With a total tally of 60,779 units, Hyundai has registered sales growth of 19.5 per cent when compared to the corresponding month from 2017. Hyundai India also achieved the milestone of eight million units manufactured in June 2018 since they began operations to become the first manufacturer to achieve such a feat in India ever. Hyundai claims the updates they offered with the launch of the new Creta, Elite i20, Grand i10 and the all-new Verna were responsible for the growth and achievement.

One manufacturer who has seen a massive jump in sales in Toyota. With 14,102 units sold in June 2018, it is a growth of 288.6 per cent as it sold 3,628 units in June 2017. Toyota claims that the major contributor to this performance is thanks to the arrival of the Yaris and the never-ending demand for the Innova Crysta. Toyota’s domestic sales have been registered to be 13,088 units in the month of June 2018.

With double-digit growth, Honda Cars India closed at 37.5 per cent in June 2018 with 17,602 units sold overall in the domestic market. Exports were limited to just 486 units. The introduction of the Amaze, Honda sold 9,103 units of the compact sedan in June 2018, while it had managed to sell 9,789 last year of the previous generation model.

Mahindra & Mahindra saw a sales growth of 25 per cent with 45,155 units sold the month of June 2018 when compared to the corresponding month last year. Mahindra reported domestic sales of 41,698 units, while the manufacturer exported 3,466 units leading to a growth of 87 per cent for their exports. The credit for Mahindra’s growth goes predominantly to the SUV segment in addition to the LCVs and pickup trucks.

Tata Motors showed strong sales growth with a rise of 63 per cent when compared to last year. Their domestic passenger car sales stood at 18,213 units. Tata Motors claims that this growth has been driven by the demand for the Tiago, Tigor, Hexa and the Nexon. June 2018 also saw the combined production of Tiago and Tigor cross the important milestone of 200,000 units.

Ford India has registered a domestic growth of 37 per cent with 8,444 units sold in June 2018, when compared to 6,149 units in June 2017. In June 2018, Ford has also reached the one million domestic wholesale milestone in India. However, Ford did witness a slump in exports as they only managed to push out 10,386 vehicles against 14,649 units in June 2017. This has resulted in an overall slump in sales for Ford with just 18,830 vehicles when compared to 20,828 units sold last year during the same time period.