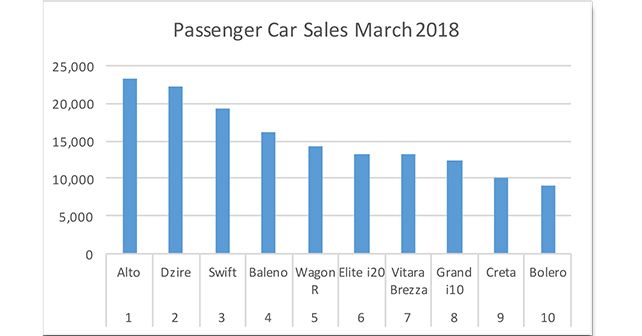 We take a look at how popularity and demand of car models have changed over the span of the last financial year, from March 2017 to 2018.

As far as we can remember, Maruti Suzuki, with its huge chunk of the market share, leads the car sales charts in India. With six cars in the top ten list in March 2017, Maruti has repeated the feat this year as well. However, the numbers are strikingly better this time. Let’s take a closer look at the sales figures for the month of March to understand the where different cars stood 2017 in respect to where they stand in 2018.

In 2017, the Baleno from Maruti Suzuki was relatively new. Probably, for this very reason it outshone the Dzire in sales in that year. Now that Maruti has given us the all-new Dzire bared on the Baleno’s Heartec platform, the Dzire has now become the second best-selling model this year, with 22,195 units sold. Dzire sales have grown 39.6% this year in comparison to the last year.

Now that the new Swift has arrived, the market has responded well towards it. The Swift is the third best-selling car in March 2018 in India, with total sales recorded at 19,207 units, registering a 23.8% growth. The Dzire due to its popularity with cab drivers and fleet owners, nearly always outsells the Swift in our market.

Following the updates of the Swift and Dzire, both of which are now brand new and offer a lot of equipment, in addition to automatic options for the petrol and diesel models, the Baleno has been no match for the newcomers in outright sales, although it has stood its ground in terms of numbers. Last year, 16,426 units of the Baleno found buyers. This year the number is almost the same –16,254 units. The change in year-on-year sales is marginal, but it has dropped the Baleno down to fourth place in the best-seller list.

Dethroning the Hyundai Grand i10, which was the fifth best-seller last year, the WagonR with 14,208 units has outsold it this year to take its place, allowing Maruti Suzuki to occupy top five spots unchallenged. Year-on-year sales of the WagonR grew up 17.4% when compared to 12,105 units of the last year. 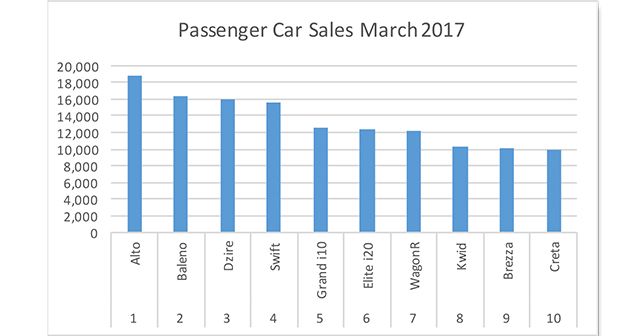 Standing its ground in sixth place, Hyundai’s Elite i20 sold 13,319 units this year, registering a growth of 7.5% from the last year when they sold 12,394 units. While this is the first car on the list which is not a Maruti, the growth rate for the new Elite i20 – which was launched at the 2018 Auto Expo – has been relatively underwhelming, especially when compared to the previous year.

In seventh place, it’s the Maruti Suzuki Vitara Brezza with 13,147 units sold in March 2018, – a significant jump from its earlier ninth place. As Maruti sold around 10,057 units last year, sales of the Brezza has grown by 30.7%. It’s seventh position also makes it the best-selling UV in the market.

While the Kwid was one of the best-selling cars last year, this year the story for Renault India is quite different. After holding the eight best-selling car spot in March 2017, sales for the little SUV styled hatchback has slumped catastrophically by 43.2%, as the sales numbers from last year which stood at 10,269 units has dropped down to 5,836 units. Currently, the eighth position is held by Hyundai’s Grand i10, which has also held its ground in unit sales with 12,476 vehicles sold this March.

As the popularity for the Brezza has increased, the Hyundai Creta is not far behind. In March 2017, Hyundai sold 10,001 units, while in March 2018 Hyundai sold exactly 10 units more. Growth for the Creta is a mere 0.1%, however, it does show that the model has made a significant yet secure place for itself in the market among Indian consumers.

Lower down the order, the Tata Tiago is now the eleventh best-selling car in India, followed by Maruti’s Celerio and Eeco in 12th and 13th places, respectively. In 14th position is Toyota’s Innova, which is the best-selling MPV in the country, while Maruti’s Omni van is 15th on the list.