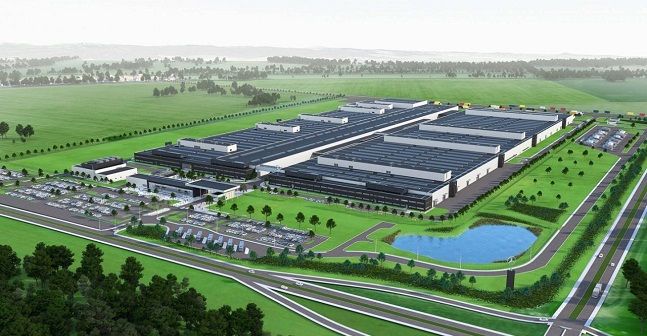 More than 1,000 jobs will be created at the new engine factory in Jawor, as Mercedes-Benz Cars celebrates further progress of new high-tech engine plant in Poland.

German luxury car maker Mercedes-Benz has nearly completed construction work on its state-of-the-art high-tech engine plant in Jawor, Poland. With this new facility, the company is increasing capacities within the global production network of Mercedes vehicles. The factory will produce four-cylinder diesel and petrol engines for hybrids as well as conventional vehicles and will supply Mercedes-Benz plants around the world. Different engine variants will be produced alongside the corresponding crankcases on highly flexible lines that will ensure quick reactions to market demand.

The site in Jawor will also be among the first CO2-neutral factories for the german car maker. 100 percent of the electricity will be obtained from renewable energies and the heat requirement will be obtained through a power plant directly at the factory fence. About 600 sensors will record energy consumption, and the data will be accessed and controlled on touch-screens in real time, thereby reducing the energy requirements of the factory. Industry 4.0 applications such as a real-time management information system and digital shop floor management will also play an important role. The facility will also use driverless transport systems to transport materials, which can be tracked at all times, making physical inventory unnecessary. Augmented Reality and Big Data analyses will also be used to support the employees during the assembly processes and will help avoid errors at an early stage and prevent machine failures.

The facility will create 1,000 jobs to cope with high demand for its high-tech four cylinder engines, and production will start by the end of 2019. The engines produced in Jawor will combine modern engine technology and partial electrification using 48 volt technology.

'As a so called ‘greenfield’ project, the new engine plant in Jawor offers an excellent opportunity to establish an integrated production concept on a newly built site. Jawor will be our benchmark regarding green high-tech production. It is of course a challenge to transfer the same measures into existing, historically grown factories in our powertrain production network, but it is our aim to implement as many as possible, using Jawor to test feasibility,' stated Frank Deiß, Head of Production Powertrain, Mercedes-Benz Cars.