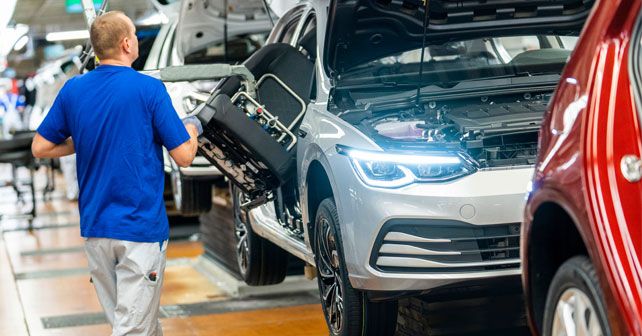 Volkswagen has resumed gradual vehicle production at its home plant that will run a single shift for this week, post which it aims to resume 40 per cent production. The company has laid out a 100 point plan for health care and prevention of COVID-19 for its workforce.

In an attempt to move past the coronavirus pandemic, Volkswagen has resumed vehicle production at its Wolfsburg plant. The plant will initially operate on a single shift with 10-15 per cent production capacity of the plant for the first week post which it is expected that the company will scale up to 40 per cent production. Around 8,000 employees have returned to the plant to operate the single production shift and are following a 100 point plan for health care and prevention of COVID-19.

As of now production of the Volkswagen Golf has begun at the Wolfsburg plant and from Wednesday, production will also commence for VW Tiguan, Touran as well as the Seat Tarraco. In order to ensure seamless supply of ancillary components, around 2,600 suppliers (a majority of whom are located in Germany) have resumed production as well to supply the Wolfsburg factory.

By the end of the week, VW is expected to churn out around 1,400 cars, following which the number will be ramped up to 6,000 units. Dealers meanwhile will be able to deliver vehicles to customers as some 70 per cent of company dealerships are already open for business in Germany.

“Step-by-step resumption of production is an important signal for the workforce, dealerships, suppliers and the wider economy. In terms of managing the crisis, though, this is just the first step. Additional momentum is needed to stimulate demand in Germany and throughout Europe so that production volumes can be successively increased,” said, Ralf Brandstätter, Chief Operating Officer of the Volkswagen Passenger Cars brand.