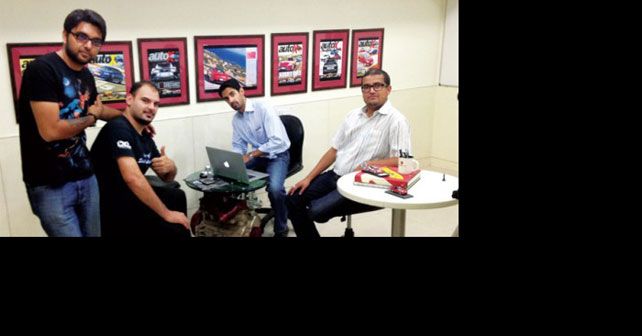 Ashish says amazing things are achieved though passion alone, not the lure of material gain.

If you’ve invested time in learning about the automotive industry, and how it all started, you’d be aware that the history books are ornamented with many names that brought about an exponential number of innovations. They were the superheroes of industrial world – right from Ferdinand Verbiest, who created a steam-powered vehicle (circa 1672) at the behest of a Chinese emperor, to much more recent names like Karl Benz, Henry Ford, Nikolaus Otto, and Rudolf Diesel.

And if you think that the chaps of the bygone years weren’t forward thinkers – well, you’re, quite simply, awfully wrong. Today, manufacturers are investing billions in R&D on alternate fuel technologies and hydrogen fuel-cells, but it was way back in 1838 that Christian Friedrich Schönbein made headlines by discovering the principle of hydrogen fuel-cell technology. Not just that, the electric cars running today with the claim of being ‘eco-friendly’ owe it all to two chaps who lived during your great-great grand-dad’s time – Ányos Jedlik and Gaston Planté, inventors of the electric motor and the lead-acid battery.

But a lot of you reading this are, I reckon, the young-and-fast type, so let me mention two more names from the auto world that you’d actually recognise – Horacio Pagani and Tetsuya Tada. Horacio Pagani is the man responsible for creating Pagani, and the two hyper cars that (I’m quite sure) adorn your bedroom walls, and Tetsuya Tada is the man responsible for the brilliantly simple and massive fun-to-drive Toyota GT86.

Now, what all these pioneers share in common is passion – a raw and deep love for the automobile, industrial growth, and innovation. And though, at autoX, we aren’t inventors or revolutionaries, we are indeed passionate blokes who’ve been pioneers in our own small way.

The magazine that you now know as autoX had humble beginnings 7 years ago, and it’s since grown from strength-to-strength. I’ve been a part of this extremely dynamic team ever since the transformation from autoXchange to autoX happened 4 years ago. It’s not easy writing this – my last column as the core member of the autoX team – but as Dhruv, and one Greek chap named Heraclitus, aptly said, “The only thing constant in life is change.” I’m moving on, taking with me countless memories of what we’ve shared over the past 4 years together as a band-of-brothers. But the one thing that binds us ever-so-tightly is the undying passion that we share for all things automotive.

We’ve had huge fun over the years – that instant idea to drive 300 clicks merely to have breakfast; the experience of riding out together to godforsaken places; the anniversary issues, and the work that went into making them happen, and the resulting fun we’ve had producing stories for each of them. The landmark 75th issue of autoX, and how we almost forgot it was our 75th (time flies)! The many fights and shouting matches, the team outings, the beer gulping sessions, the chai-and-sutta breaks, the never-ending nights-out, the alarming last minute hustle during issue closing, and the desk-sleeping. It hasn’t come easy though – like the time when Kapil almost got swept away by the massive water current during a photoshoot (he’d be six-feet-under if it hadn’t been for me holding on to his belt); the time when Manas (the then communications top-man at Mercedes-Benz) was struggling for oxygen – as did all of us, in fact; the many times Jared has emerged in one piece after being tested by the forces of nature on a ride; and the incalculable laps that Dhruv’s done around the BIC. It all sounds fun, doesn’t it? It was, but it was also massively arduous – and, at times, bordering on dangerous. But we still did it all – because it was done out of passion.

The media fraternity is growing massively these days, and automotive journalism is getting increasingly popular. But, among the younger generation (yes, even I can say that now), I’ve noticed that obsession and spirit are gradually being replaced by the lure of material gain and having the opportunity to show off. Remember, always be grounded, humble, respectful, jovial and devoted. Most of all, keep that spirit alive. Nothing else matters. Nothing ever did.