Is a worker beating metal in a foundry an artist 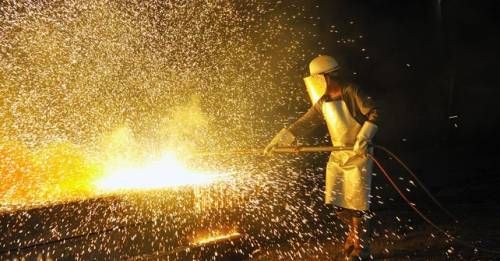 Ashish wants us to stop pigeonholing creativity. Is a worker beating metal in a foundry an artist, he asks?

Creativity isn't anyone’s copyright. There’s no patent on it. Yet, there are stereotypical perceptions around what’s classified as creativity and creative people.

If you’re a long-locked dude who wears crew-necks with AC/DC graphics, cargo shorts and Converse sneakers, but have no idea of guitar chords, then you’re the next best thing to a musician since you fit the appearance — a design sprout with an advertising agency. If you’re one who wears trimmed suits with contrasting socks and strange shoes that are yet to see the marketplace, you’re a trend-setting fashion designer.

Closer to my profession, if you pair your jeans with Kurtas and walk around wearing Kolhapuris with a sling bag full of notepads, ink-tools and books, you’re a journalist, or a scriptwriter. And those are recognised as creative professions.

If you’re a shopkeeper at a garments store, it’s perceived as a low-rent profession that gives society the right to be nasty towards you by default. Bloody moronic. While, on the other hand, if you’re a chef in an ace restaurant, you’re an artist – a creative bloke. Bloody hypocrisy!

I had a debate with an older gentleman about what exactly is creative genius? He’s a writer. That, by universal recognition, makes him a creative person. It was a get-together of sorts, and most people in his age zone seemed to side with him. A worker beating metal in a foundry isn't an artist, but a person working on surface design with a space-age digital ‘pen’ on a high-tech screen in an air-conditioned design room is borderline orgasmic in the books of creativity! Now, knowing the industry of my trade, the man threw a statement at me — what’s creative about a car other than the design aspect? “Everything else, too.” His face shrunk from a swell of smug expression to sudden embarrassment.

But, really, making an automobile isn't an emotionless process. People associate the word ‘mechanical’ with emotionless or boring because the usage of the word in sentence framing often reads exactly that. Making an automobile is a mechanical process, but it’s huge on emotion and spirit. That is especially true for boutique auto workshops or small, niche manufacturers — because the word is so fashionable these days.

There’s a certain artistic appeal looking at all the gears meshing against each other, their teeth perfectly formed and accurately laser-cut. There’s huge design elegance in a camshaft. There’s massive style in the exterior shape.

Yes, you may argue that the automobiles of today are becoming smart phones on wheels, and being the analogue chap that I am I may even agree with you. But you’re missing the point. Those geeks working in front of computer screens developing systems to enhance the convenience, comfort and safety in your car, are artists in their own right. You see the aesthetic value in its metal exterior; they see beauty in its algorithms.

Some old folks in my family go romantic for big-engined American cars from the 60s. They are alarmed when I tell them that the sexy BMW sport car they just saw in the magazine’s pages has a three-cylinder 1.5-litre petrol engine, and some electricity (they’d shun me if I said hybrid). A 20-minute rant-session on what’s gone wrong with the world followed. That included politics, sport, culture, manners, and Justin ‘Beaver’ (sorry, Justin).

But imagine — isn't downsizing from massive V12s to V6s, and now even I4s for similar power outputs and better overall performance, not creative enough? Is working overtime to fine-tune the way a bike or a car sounds artistic? Art is how you think, rather than how you impact another’s understanding. There should always be an element of mystery around creativity. A bit over-the-top is always good. It doesn’t matter if you think out-of-the-box, or think inside it – what matters is that you think. When you think, the mind works, thoughts form, and creativity flows.

On a parallel, related note that old gent hasn't spoken to me since.