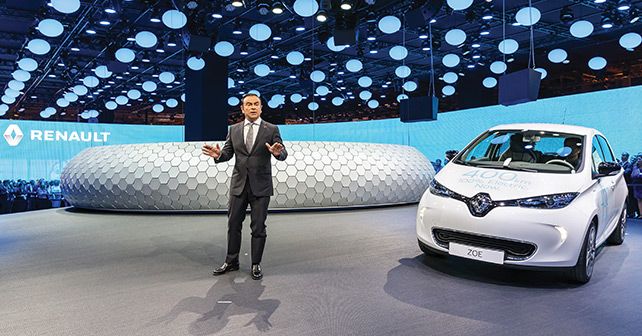 Leaving 2019 with a bang, former Renault-Nissan CEO Carlos Ghosn fled Japan in a wild stunt that involved a musical band and a journey in a private jet through Turkey into his home country Lebanon, where he will likely be safe from even Interpol, which has issued a warrant for his arrest.

Ghosn has taken Renault and Nissan to great heights by forging a largely successful alliance and streamlining its products and platforms, yet he has also shown surprisingly bad judgement several times. For instance, his bet on electric vehicles was premature – the Leaf remains a niche vehicle. There was the embarrassing ‘spy scandal’ of 2010/11, when a paranoid Ghosn believed the hoax that ‘the Chinese’ were out to steal his EV secrets and had three top-level executives fired and prosecuted.

Ghosn was known for swift and unceremonious decisions, many of them unimpressive from a design or product strategy point of view. Previously revered by the design community, Renault cranked out some of the worst contemporary designs under Ghosn’s reign and at his behest.

Eventually, greed was his downfall, and the allegations of kickbacks and excessive compensation are far more credible that the hoax he fell for a decade ago. His escape from Japan is a deep embarrassment and slap in the face for the authorities and the country that hosted him for many years, and his public image is beyond saving. What’s ahead for us is many years of self-righteous accusations and explanations. At least, it will be entertaining.

Korea continues to impress
I remain impressed by the new models launched by Hyundai and its subsidiaries. Over the Christmas holidays, I tested the 275 horsepower Hyundai i30 N extensively. The car is incredibly precise, fast and generally exceeds expectations. At the upper end of the spectrum, we have seen the first pictures of the soon-to-be-launched Genesis GV80, the brand’s first SUV. The interior is characterized by a futuristic two-spoke steering wheel and an ultra-wide touch-sensitive 14.5-inch central screen. Augmented reality functions help keep you in your lane, and a new generation of counter-sound technologies will cut unwanted noise sharply. The driver’s seat is equipped with seven air cushions, and a camera system scans the road surface and relays that information to the electronically controlled chassis, which prepares accordingly. Other technology highlights include a cruise control system that analyzes the owner’s driving style and can emulate it when driving autonomously. Under the hood, the GV80 comes with a range of four and six cylinder petrol and diesel powertrains.

This much is obvious, Hyundai, Kia and Genesis are not fast followers anymore – they’re leaders.

Volkswagen is lost
Volkswagen is a brand that appears to be deeply confused as it enters 2020. It’s devoting its main focus on aggressive electrifications, although I’m told that there are still more engineers working on optimizing the internal combustion engine than on electric motors. But the ICE line-up has been cut sharply. There will only be one diesel left, the 2.0 TDI, and the petrol engine line-up will consist of the 1.0-litre three, the 1.5-liter four and the 2.0-litre four. The VR6 is soon dead.

The manic push towards electrification has led to significant delays on both the Golf Mk VIII and the ID.3, both of which are late to the market. The future of the Polo is in limbo, and the successor of the Up has been killed.

Meanwhile, the market for EVs is not nearly growing as fast as anticipated. Experience in Europe suggests that it rises and falls with generous subsidies, and even in China the take rate hovers below 5% - including plug-in hybrids. At the beginning of the year, IONITY – a consortium of German carmakers that erects and runs fast charging stations along the major motorways in Germany – has increased its fees by up to ten times in order to cut losses.

I’m not sure this bodes well for the imminent launch of the VW ID.3 or any of its siblings. Let’s wait and see; my personal car for 2020 will be a V6 diesel.

Also read - Is Audi's CEO's arrest over Dieselgate an end of Deutscland AG?