A serious lack of regard for safety among riders 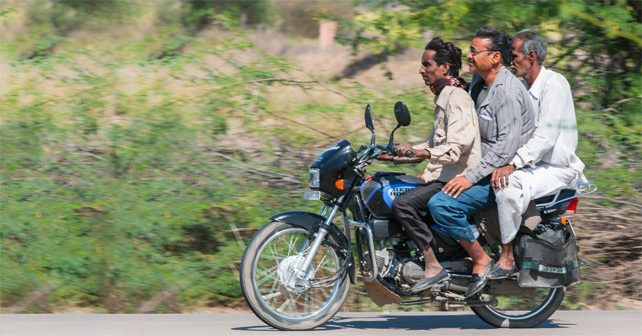 Have you seen these people that have their brains on their elbows? No? Well maybe you just didn’t notice but they are not too hard to come by. They are all over the place...

I am talking about the people who ride their motorcycles with the helmet on their arm, covering their elbow. Or not even carry one at all. I wonder why it is so difficult for people to wear a simple thing object such as a helmet. After all, it is a proven life saver. A vast majority of riders in our country wear a helmet just because there is a law against not wearing one. But, many of the helmets used by riders are so flimsy that it feels as if they will come apart if they are used even in heavy rain!

Recently, I was riding a fully loaded Triumph Tiger in North Bengal…crawling through chaotic traffic along a narrow stretch of road. At one point, I was standing still, when suddenly I was hit by a scooter. The impact made me lean on one side, but luckily there was a stationary SUV on my side, which stopped my fall. The scooter that hit me was being ridden by a pretty young girl, with a pillion, and neither of them were wearing helmets. My protective gear saved me from any injuries, but the girl was not so lucky. Her forehead hit my pannier and there was an ugly gash. Although it was not life threatening, a helmet would certainly have saved her from that injury and a permanent scar.

While this happened in a small town in the countryside, one would expect that in a city like Delhi, with all the traffic police around, riders would be a little more law abiding and safety conscious. But that is not the case. Most of the roads in Delhi have chaotic traffic, which means that you hardly shift beyond third gear. On one such congested stretch of road, I was crawling along when a cool dude pulls up alongside on a highly modified Pulsar. He didn’t have a helmet on. It was dangling on his arm but the sunglasses he had on seemed quite expensive.  We rode alongside a bit and he was revving his bike all the time. I’m quite familiar with these kind of riders, and he lived up to my expectation. He couldn’t resist the temptation of challenging me to a race! I accepted defeat with folded hands and he sneered at me before opening the throttle wide and disappearing in some lane while doing a wheelie. I am sure he wanted to convey the coolness of his act and the “cool” factor is accentuated a lot more by the fact that he can do stunts without even caring to wear a helmet.

I understand that many of these riders have thick skulls or are naive but even a fool can understand the fact that the road is not exactly made of jelly. And in the case of an impact, it is the road that sees the least damage. I do not have anything personal against riders without helmets or with riders performing stunts. But I certainly have an issue with irresponsible riders if they endanger my life. We frequently come across riders who think that the public roads are the racetrack and that they can pull off stunts at will. But, stunts can go wrong anytime and on a public road, it is a serious threat to others too. A rider without a helmet is an irresponsible rider. If he /she has a death wish, I don’t have a problem with it. But if they want to commit harakiri, they are better off doing so alone and not harm an innocent bystander along with them.