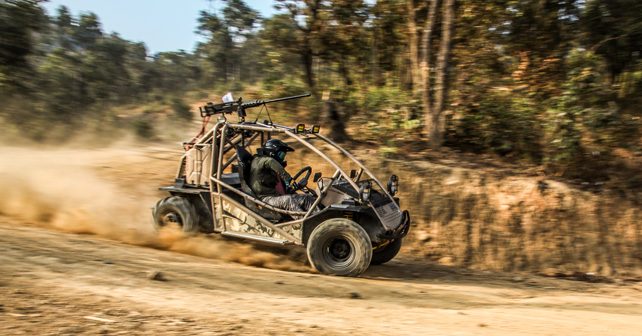 How does the average Joe drive something interesting or exotic? Shahwar’s advice is simple – build it yourself!

I was riding my motorcycle on the twisty roads at the outskirts of Kohima in Nagaland recently, enjoying the brilliant winter sun in the afternoon. As I looked in my rearview mirror, I saw a strange four-wheeler heading towards me at a rather good speed. It was too interesting to simply let it pass. So I pulled over, and waved him in.

Grinning behind the wheel was K.K. Paul Rutsa, an old friend and a petrol-head. He’s built an off-road vehicle all by himself, using a Polaris as inspiration. Usually, when people with limited resources build their own cars, there are normally a bunch of rough edges – but this was an exception!

During one of my recent tours on a Polaris RZR, Paul had driven it and simply fell in love with the vehicle. But the astronomical price meant that it was way out of reach for him. So he decided to build one himself!

Paul bought a Maruti 800 from a scrapyard, cut off everything, except the floor, and built a whole new frame around it. He shifted the engine to the rear, which called for a lot of innovations. The braking system now has discs all around, the radiator has shifted, and steering system had to be changed.

The tubular frame that he built all around the vehicle is strong, but a little heavy. With all the lights and the bull frame, it certainly looks tough though. And it’s a fun car. Since it’s a rear wheel driven vehicle now, the fun quotient has gone through the roof. Of course, the suspension still needs to be reworked to make it more supple.

I drove the vehicle mostly through a network of off-road sections, and I must say that it handles rather well. No one bothered to ask me about the papers of the vehicle. But the fact remains that getting papers for a home built car such as this a bit of a grey area. The rules say that – as long the engine and the chassis of the vehicle hasn’t been tampered with – one can retain the original registration of the vehicle. But in an overwhelming number of cases, that won’t be the case.

Wouldn’t it be absolutely fabulous if you could drive around in a machine that’s visibly inspired from a Morgan Plus 4, or a Jaguar E Type, or any one of those exotic old cars – or have unlimited fun in an off-road vehicle like this one? Well, there are people who can easily afford to buy these fantastic machines – but I’m not talking about them. I’m speaking for the average Joe here – people like me. And, dare I say it, the kit car is the answer to our desires and fantasies.

In the West, there are a whole lot of kit car manufacturers. These cars are perfectly road legal. Many sell the whole body shell and all the accessories, while others offer a more challenging kit that requires the enthusiast to build the car at their own home.

I wonder why we don’t have such manufacturers or distributors in our country. Do the laws forbid it? Or are there not enough buyers? On the latter, I wouldn’t think so. If I could drive around in something that looks and feels like a Morgan Plus 4 at an affordable price, I would certainly consider it. Of course, everyone knows that it’s not the real thing but that’s perfectly okay – it isn’t meant to be.

If only there were some prescribed safety guidelines, or a framework, in place, the ingenuity of enthusiasts could really throw up some fantastic concepts and innovations. Garage owners are always making cars and bikes on their own – contraptions mostly. Paul’s buggy (if we can call it that), is a work-in-progress, and I’m sure that it’ll continue to evolve and improve – with a bigger engine too I’m told.

If Paul and his tribe are given a little leeway and encouragement, the scenario of home-made cars could take a very interesting turn indeed.