Travel is the mother of all education 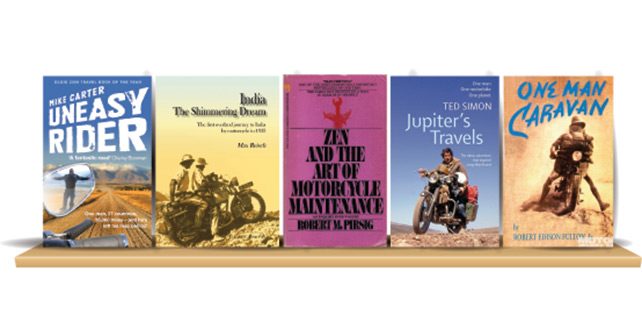 Shahwar says that the best education is on the road to faraway and exotic places. Here, he lists the books the inspired him. He hopes they’ll light the spark for you as well...

When I was little more than a kid, a cousin presented me with a book titled Jupiter’s Travels by Ted Simon. It was one of the best gifts that I ever got! The book is about Simon’s travels around the world on a Triumph Tiger 100 motorcycle. He tells his story beautifully, and takes you along on his 4-year long journey across the world. Suffice to say, it’s widely regarded as the holy grail of motorcycle travelogues.

For many years, that was the only motorcycle travel book that I had read – and I’ve read it countless times from cover-to-cover. To say that the book is inspirational is a gross understatement. If you’re even slightly inclined towards motorcycle travelling, Jupiter’s Travels will urge and push you towards fulfilling at least a part of your dream.

This book is sure to command a place of pride on the bookshelves of long distance motorcycle travelers, as does Zen and the Art of Motorcycle Maintenance by Robert Pirsig.

The Internet has opened up a world of fantastic motorcycle travel books to us. Over the years, I’ve read some truly inspirational books like One Man Caravan by Robert Edison Fulton, Uneasy Rider by Mike Carter, Running with the Moon by Jonny Bealby, India: The Shimmering Dream by Max Reisch, A Short Ride in the Jungle: The Ho Chi Minh Trail by Motorcycle by Antonia Bolingbroke-Kent, and a bunch of others.

Long distance motorcycle travelogues turn travelers into storytellers – of course, some tell their stories better than others. As we read their amazing stories, and see their photos from all manner of exotic places, pretty much all of us wish we could have joined them on their travels.

The thing is, we can travel like them. They are ordinary people like you and me – with the exceptions, perhaps, of Ewan McGregor and Charley Boorman.

Ted Simon was not a celebrity. He was a writer, but he had the courage and conviction to travel the world.

We need not attempt a RTW-tour in one go, but can make a start by travelling in our own country. We have a wonderful country, and there are innumerable places to explore. In these days of blogs and social media, our travel will invariably inspire others to do the same. The passion is always there, it just needs a spark to get the wheels rolling.

People travel around in all sorts of motorcycles – from the huge Goldwings to a ‘made-for-the-job’ BMW GS1200, to tiny scooters, and BSA Bantam motorcycles. The idea is to travel, and the motorcycle is just a means to an end. Size does not matter. I met a girl from Singapore doing a RTW-tour on a Vespa scooter, and another girl from Austria on a battered Suzuki 650 – and many guys on a wide variety of motorcycles.

Having spoken to many of them, I realized that all of them have been inspired by some other travelers – and their tales from exotic and faraway places.

As for me, Ted Simon has been the single biggest inspiration – an inspiration that has changed my life irrevocably.
Travel is the mother of all education, and I plan to take my next lesson along a route that will take me through Myanmar, Thailand, Cambodia, Vietnam and Laos.