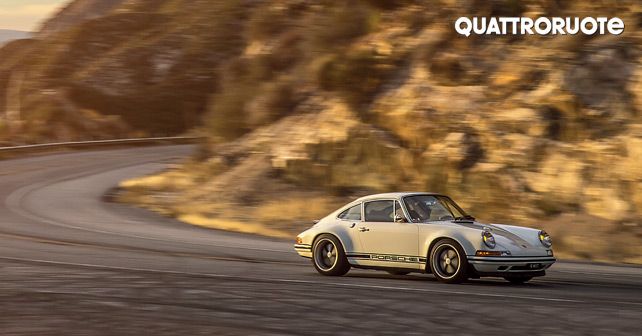 Every Porsche 964, as ‘reimagined by Singer,’ is a timeless masterpiece. We travel to Singer’s home on the West coast of the US to truly understand where this brand, which has literally taken the world by storm, is coming from.

Many have attempted to revive old icons of the past, but, more often than not, the end result is a clumsy replica. This one, though, is a little different. Why? Well, for one, it’s been customised by none other than Southern California based Singer Vehicle Design. And they aren’t your run-of-the-mill restorers. So far, they’ve built 100 samples of the car, and there’s a waiting period of over two-and-a-half years! And why not? For Singer, ‘everything is important.’ After all, the devil is in the details. And that’s why every restoration costs around half-a-million US dollars (plus the donor car). Now, if that seems like a lot, then let us remind you that earlier this year Singer joined hands with Williams Racing to restore some 75 special units of the 964 generation of the 911 – and, of course, these are a little more expensive. One million each! And yes, they’re all already spoken for.

It wouldn’t be strange for you to wonder why anyone would spend that kind of money on what is basically a reinterpretation of an old Porsche 911, especially when the market is flooded with new 911s – there are as many as 24 variants available new at the moment. To be completely honest, that question left us scratching our heads too. But it didn’t take us long to figure out the answer. You see, most people who opt for a 911 today do so for one of two reasons – they want one either as an everyday sports car (Carrera, Cabriolet) or for its breath-taking performance on a racetrack (GT3, Turbo and GT2). But here’s the rub – they all look, um, virtually identical to each other. And then there’s the fact that new models get outdated quite quickly these days, as Porsche keeps on refreshing them every year. So, why buy a Carrera S for your weekdays and a GT3 for the weekends when you can have both – all rolled into one breathtakingly beautiful body?

A Singer’s aesthetic appeal is timeless, and its performance is so brilliant that you won’t miss the liquid cooled engine. Add to that the fact that its value remains unchanged over time, and you’ll find it difficult to come up with a reason not to buy one.

Customisation Redefined
Let’s be honest, it’s quite unlikely that those who can afford a 964 from Singer haven’t already got some other jewels parked in their garage – probably also from Zuffenhausen. But maybe they’re tired of a continuous succession of models that are all pretty much the same. What they want in their garage is the Porsche of their dreams – a beautiful and sinuous 911, like the models manufactured during the early seventies, but one that performs like a modern 911. This is the recipe for the ultimate Porsche for many – maybe not perfect or traditionally accurate, but custom built to the last bolt. 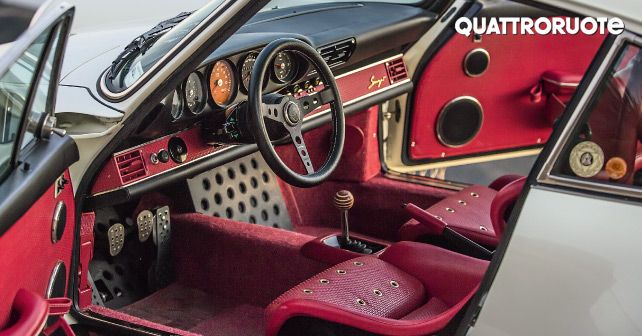 The Singer pushes the idea of bespoke to its limit, since only the chassis remains original. In the last few years, the carbon fibre body panels have been refined to perfection to resemble the curves of a classic 911, but with wider haunches and even more slender bumpers. The wheels look similar to the Fuchs-type rims from the past, but in fact they’re 17-inches in size to properly hide the brake callipers and discs. The interior is unmistakably 911, but the seats and upholstery can assume any shape and use any material that you could possibly desire. And the levels of finishing are simply beyond belief. Everything here is assembled with mathematical precision and great attention to detail. Even the electrical system has been redone from scratch following aeronautical specifications. Plus, a technician specialised in aircraft sound insulation was consulted to develop a kit from scratch for its soundproofing. All this might seem a bit much, but it’s because of this attention to detail and this level of care that the only sound audible in the cabin is that which is desired by the driver – that from the titanium intake trumpets and twin tip exhaust.

The six-cylinder boxer engine is built by Ed Pink Racing, which currently is the only supplier for Singer’s ‘normal’ series of vehicles. Only very few components are reused from the original motor. These components are cleaned and reworked with even less tolerances than when they were new. The engine note is more or less like that of the 997 GT3, with its pitch changing at around 4,500rpm – which is to say it becomes decisively more audible.

A New Life
We were lucky enough to test this example from Singer in the hills around LA – the very landscape that proved to be the perfect testbed for Singer. The 4-litre engine by Ed Pink generates 409bhp and features a Motec control unit. Mind you, what we drove was only a prototype, with the electronics not yet in place, and still the power was profound. The power delivery low down is impressive, and it revs all the way to 8,000rpm.

Driving this car is an experience in itself, which any car enthusiast would be lucky to have. It exalts all the typical Porsche features – the good ones – and mitigates those that are not so good. This balance is what makes it as good as a 2018 911, something that the 964 lacked. The vehicle has excellent traction, as is expected from a 911 – maybe a bit too much since it’s difficult to power oversteer, unless done deliberately. However, playing with the acceleration in the bends brings the rear axle to life, and it seems to be able to adjust its trajectory if teased. A word of caution, though, don’t overdo it – for its carbon fibre sides are pretty expensive, and a 911 still is a 911 after all. All the weight is on the rear, so it can come around on you!

Another important and interesting aspect is the great attention to detail in terms of extreme personalisation to make the driving experience a pleasurable one. Thus, you have the option of either a soft and understeering 911 or an extreme drifting and bone-crushing 911, since every component can be adjusted (the Ohlins damper can be adjusted three ways). Michelin has even produced the Sport Cup 2 in a specific compound to make the most of it on a racetrack, but, if fitted with lesser performing tyres, the car will be more predictable in its reactions. But it’ll still be fun. How much fun you have is directly commensurate with how much you want to spend. Isn’t it always? 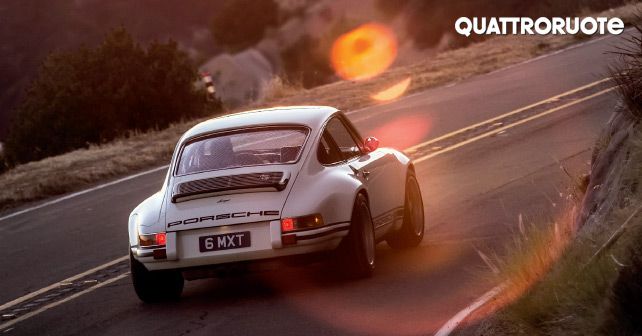 Heaven on earth
Sunset, a smooth winding road, the roar of six-cylinder boxer engine… ah, heaven for Porsche enthusiasts exists after all. 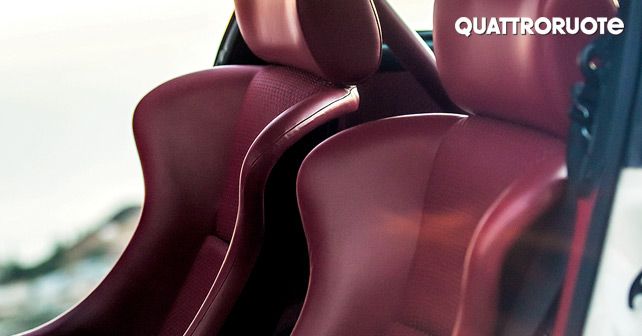 Fitted to the driver
Everything has been redesigned and perfected to the smallest detail – the Recaro seats, for instance, are available in different shapes and types, while absolutely every surface has been finished to the highest quality. 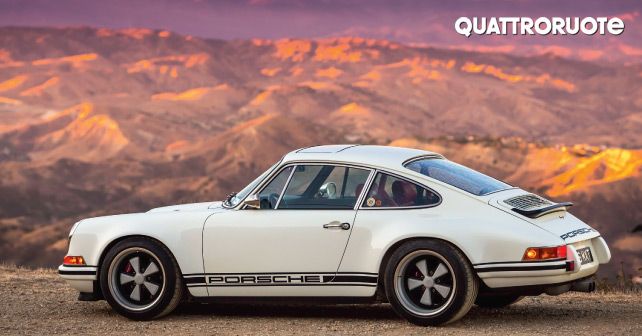 AN ARTIST OF FOUR WHEELS
Rob Dickinson, born in 1965, has always been an artist. Starting his career with car design, he learnt the basics from Julian Thomson (Lotus Elise and Land Rover Evoque, just to mention two names). Then he got into music and, for more than a decade, during the nineties and later, played for his rock band ‘Catherine Wheel’ (his cousin Bruce is the Bruce Dickinson, of Iron Maiden). In 2009, he came back to what he started with, when he decided to design the perfect 911 and founded Singer Vehicle Design in Los Angeles. We met him in one of his buildings, just above North Hollywood, and he explained to us that the key to success is his obsession for details. And, after seeing the final product, we don’t disagree. His 911 is a work of art in every sense. 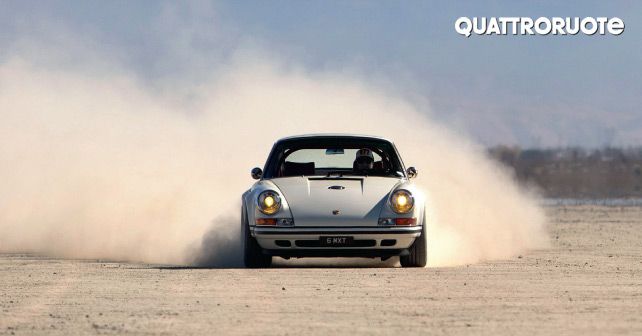 Playing in the sand
It may seem like heresy to take a Porsche into the desert, but it was an extremely thrilling experience.

Looks can be deceptive
Wide tyres on 17-inch Fuchs wheels appear perfectly connected to the carbon fenders. It’s been made to hark back to the past, but, in actuality, everything has been accurately and carefully designed by computer. 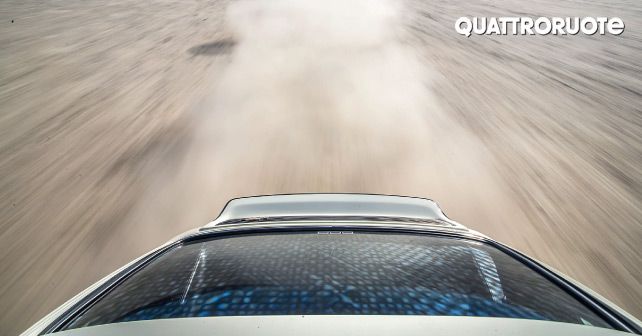 A PORSCHE IN THE DESERT?
We understand if you disapprove of pictures of this masterpiece covered in dust, but there’s a logical explanation to this. Since the car was to undergo a complete overhaul, along with a new heart, we simply couldn’t resist the temptation of doing something that no one in their right mind would do with their Porsche, let alone a Singer – spend the whole day driving at full speed in the Mojave desert, in an area called El Mirage. Try it, if you happen to stumble upon the opportunity, but do so in a rented car.