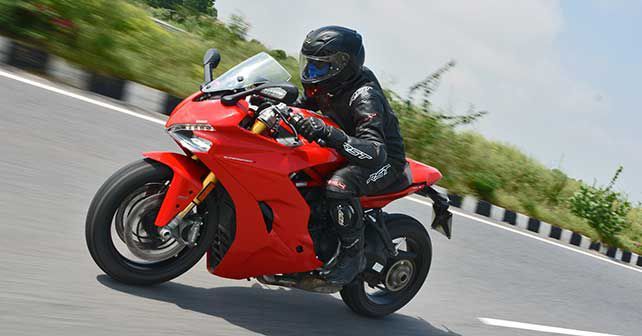 I can’t recall the umpteenth number of times when I have raved about the capability of a sports bike. But, after finishing the ride I’d always end up rubbing my back and wishing the motorcycle was more forgiving. Ducati’s insane duo ? 1299 Panigale and the 959 – can scorch any track on the planet, but you’d have to be batty to ride these two on a daily basis unless you know a very good chiropractor. Well, Ducati has decided to give our backs some relief by launching the all-new 2017 SuperSport. It is available in two variants —standard and S. As we, journalists, are a pampered lot, we got hands on the S version. Now, according to the Italian bike maker, this motorcycle is ideal for riding in the city and if and when you’re in the mood to open the throttle and do some wind talking, it will oblige to that too. All this sounded too good to be true to us, so we decided to swing our leg over the SuperSport S and take it out for a spin. 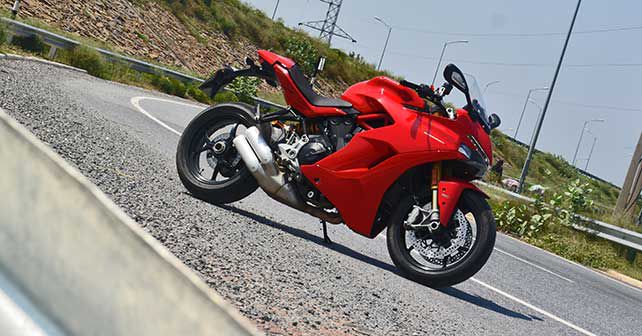 If looks could kill

At a glance, one can be forgiven to mistake this new Ducati for the Panigale as the design has been inspired by its big brother. But take a closer look at the SuperSport, and in my opinion, it looks a lot sharper, compact and edgier thanks to the gorgeous Daytime Running Light (DRL) above the headlamps. The fairing is designed similar to the Panigale, except for the SuperSport’s exhaust which is exposed. So what are the additional goodies S version gets over the standard one? For starters, it gets the fully adjustable front and rear Ohlin suspension along with a quick shifter or a slipper clutch and a passenger seat cowl.

Sit back and enjoy the ride.

The SuperSport is powered by the 108bhp 937cc engine that has been borrowed from the Hypermotard 939 and the Multistrada 950. But that’s where the similarity ends as the powerplant is retuned to ensure that the SuperSport S is a more versatile machine, which can tackle both the city roads and the highways. We will get to the engine a bit later. 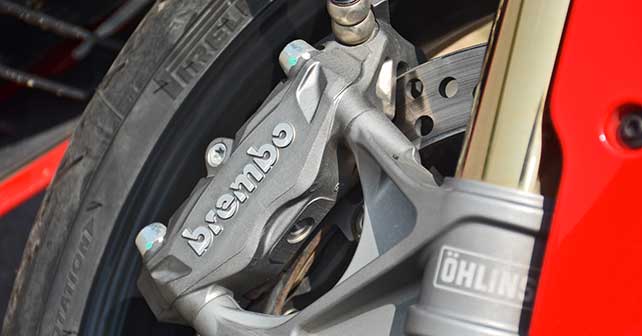 As I sat on the SuperSport S, my first reaction was ‘wow this is one comfortable seat’. As the riding posture is a lot straighter than a typical sports bike, I couldn’t wait to take it for a long ride, which in this case was a couple of hours. The raised clip-on bars ensure that not much weight was put on the arms and at the same time my knees weren’t positioned very high either. So, the good thing is that you aren't forced to crouch down and torture your back. The seat too is supportive and comfortable.

I opted to put the SuperSport S in Urban riding mode, where the engine's output is capped to 74bhp. Let me just put it this way that the exhaust note sounds sweeter when you’re wearing the helmet. I gently twisted the throttle and the bike picked up speed in a linear fashion. As I was negotiating the city traffic, I realised how nimble and easy to ride the SuperSport S is in slow moving traffic. Though slight chugging from the engine could be felt under 2,500rpm, which did remind me that its twin cylinder. After I managed to zig-zag my way out of the city, I realised how rider friendly the engine is with its wide power range, which guaranteed power even at crawling speeds. Just to give you an idea on how capable the SuperSport S is, it gets 80% of its 93Nm of torque within the 3,000rpm mark.

Finally, we hit the open roads of the newly built Palwal highway and the little voice in my head started to tell me it was time to burn some rubber. I quickly changed the riding mode to Sports. Instantly, I could feel the bike become more responsive with the lesser traction as compared to the Touring mode. I decided to open the throttle and the SuperSport S transformed into a mean machine as it brazenly pushed me back into the seat. Talk about Dr Jekyll and Mr Hyde moment! Even though the mid-range is where the motor really flourished, at the top range around 10,000rpm, it provides quite a poke.

As the bike picked up some serious speed, the quick shifter, which is a standard feature in the S, was a boon. It's precise though there were moments when I had to put my boot firmly on the quick shifter when I was downshifting from 4th gear to 3rd, all-in-all it's quite a seamless experience. Unfortunately, I didn’t come across too many twisties, but whatever little I did, the SuperSport S felt very agile and stable. What was amazing was the balance it provided when I slammed the brakes, took the corner and changed gears at the same time.

The 937cc is a gem of an engine as it doesn't intimidate you. The engine’s smooth and has a linear pickup. I wish we had a lot more time with the SuperSport S. This is Ducati's all-rounder bike that manages to achieve a bit of everything without any compromises. At 13.39 lakh, the SuperSport S is pricey, but then with all that it manages to achieve, I would say go take a test ride and if you have the money, simply buy it.