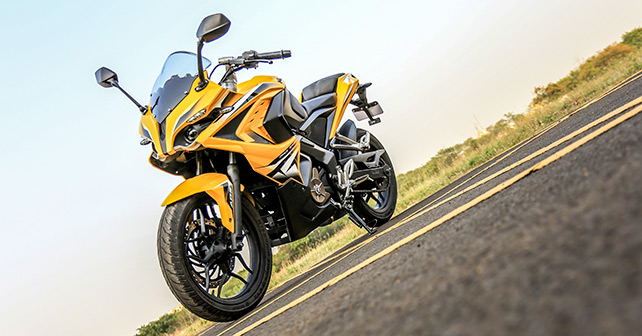 The Bajaj Pulsar 200NS gets fully clothed in this remake – and what you’re left with is a good touring machine rather than an out-and-out sports bike! So we do our Bajaj Pulsar RS200 to figure out if it is any better than its predecessors.

Amanda Lepore’s Twitter bio may read “International Bombshell,” but I’m not so sure. If you scan through the pictures available on the WWW from her salad years, before she went crazy over cosmetic jobs, you might say that she was appealing enough. Now, though, she looks like a wreck. Her mine-are-better-than-Uncle-Scrooge’s lips, the someone-pressed-me-against-the-wall nose, and Barbie-would-feel-jealous hair, make Amanda Leopre look extremely animated. Stupidly animated!

The Bajaj Pulsar RS200 is a bit like Amanda Lepore – a bit overdone! The Pulsar 200NS is a fairly sharp motorcycle, if not exactly attractive. The Pulsar RS200, mechanically, is broadly based on the 200NS – but Bajaj gave it a healthy dose of surface reconstruction, which went a bit south. There’s a sense of overdone everything in the way the Bajaj Pulsar RS200 meets your eye. The front-end looks like it’s got a heavy snout and the headlamps look like exaggerated eyes with a great deal of mascara decoration in the form of loud decals. The entire styling provides an impression of the bike being pointlessly busy and aggressive. I can’t even begin to imagine how lovely the design could’ve turned out if it had been neat and straightforward. There was potential in the 200NS, as we realised during our Bajaj Pulsar RS200, to be turned into a really impressive fully-faired machine. The RS doesn’t do justice to it – at least in the looks department. 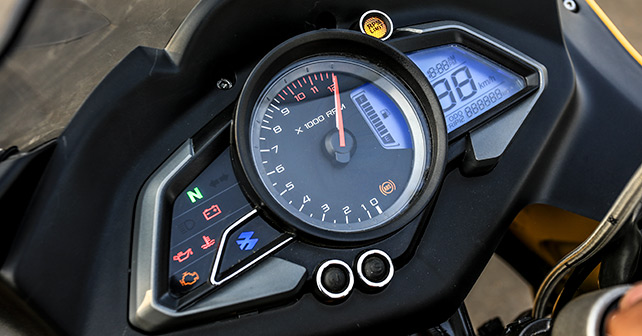 The Pulsar RS200, just before its launch event, was advertised with a caption that read, “Leave track racing to amateurs,” yet the very many of us motoring hacks were at Bajaj’s test-track to get our first impression of the bike. Either Bajaj has a strange sense of humour, or there was something ironic about the whole thing – I’m not entirely sure.

The Pulsar RS200 is being touted as being the “fastest Pulsar yet.” I’m not completely sold on that, but the bike felt plenty fast. The sprocketing has been altered in favour of high-speed stuff, and going full pelt on the main straight the needle touched 148km/h, during our Pulsar 200, with the throttle maxed out – that should translate to over 140km/h of true top speed. But there’s an issue – the engine, though quite refined, does get buzzy around the top end and you feel the vibrations through the seat. That can cause either great excitement or slight pain, or both.

During our Pulsar 200, I rode the bike at slow to moderate speeds – and to be fair, at city speeds, through any gear, the RS should feel rewarding. What I couldn’t do, however, was take the bike out on regular roads to measure its acquiescence to our stupid road conditions. But I did ride it on the basic tarmac irregularities that I could find around the test track, and the softly set-up suspension should be good enough to deliver a decent ride quality.

On the track, conversely, I had my heart in my mouth a couple of times. Leaning into a medium-fast left-hander, which immediately flows into an equally fast right-hander, the suspension felt a bit sleepy and mushy – enough to make me abandon the turn and slow right down. The RS comes ABS-equipped too, but it’s a single channel – which means that it’s fitted only on the front wheel. I didn’t really get a great deal of confidence from the brake lever and would’ve liked more communication from it. The rear tends to slide when you drop the anchor suddenly, or with heavy force, and that’s a bit unnerving. This isn’t a bike that’s attack-mode ready – this isn’t really an ‘entry-level sports bike’ to be completely honest. The reduced rake, the more comfortable (compared to the 200NS) steering-seat-peg geometry, and the overall balance of the RS200 make it a good long-distance touring machine instead.

The Bajaj Pulsar RS200 hasn’t got the oomph of the KTM RC200 or the refinement of its Japanese rivals. It is, nevertheless, fairly well balanced with acceptable performance – but with controversial looks. It is, then, the Amanda Lepore of the motorcycling world! 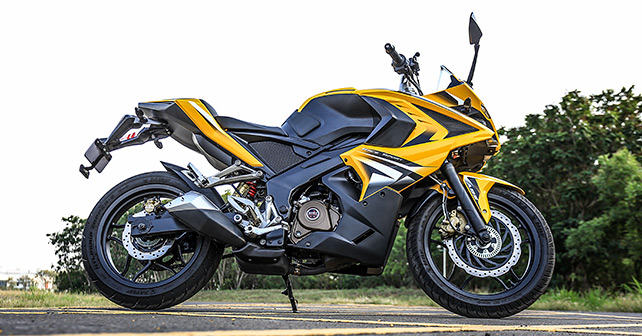 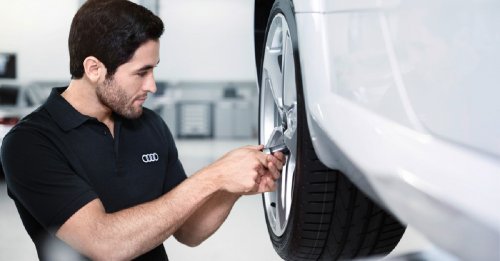