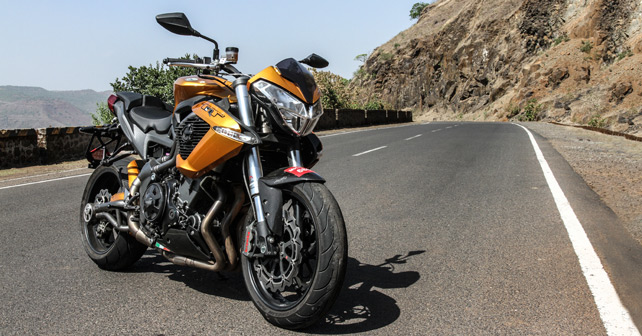 If it’s Italian, it has to be stylish. And so the Benelli TNT 1130 R looks exceptional, plus it has 135bhp of raw power. But can it handle all this grunt? We take into the hills to find out how it fares.

“Cause I’m T.N.T., I’m dynamite, and I’m a power load.” These famous lyrics by AC/DC describe what the Benelli TNT R is all about. This 1,130cc street bike looks like a beautifully crafted Decepticon, which has the heart of a maniacal Megatron, and the brawn of a Devastator. What makes it even more attractive is its over-the-top Italian design, which exudes flamboyance, confidence and style. This litre-capacity bike is Benelli’s flagship model, and we rode an Ora (gold) coloured one, which made it looks like a battle-hardened Transformer. But I decided to reign in my enthusiasm, because when I rode the TNT 600 i and TNT 899 earlier this year, I was left wanting a bit more...

I climbed onto the saddle, and decided to see who would be the master of this relationship – the bike or me. I pressed the start button and the hoarse, yet loud, exhaust started roaring. It certainly knows how to make an impression, and let everyone in the neighbourhood know it’s awake. Personally, I believe the exhaust note complements its macho looks and we’re happy it doesn’t have that synthetic refined sound of some other superbikes – which dampens the enthusiasm a bit.

I accelerated gently, so as to demonstrate a little bit of caution and get a feel for the machine. As we slowly meandered our way through traffic, it never dawned on me that this was actually a monster biding its time before it cuts loose. I was constantly waved down by enthusiasts, who wanted to take some photos with the TNT R. I couldn’t blame them, as it does look fabulous – whether it’s the aggressive headlamps or the indicator lights neatly integrated onto the fuel tank extensions, which also house radiators on both sides. The rear spits out more attitude, with the under seat carbon fibre exhaust, and the two LED tail lamps on both sides that look like the devil’s horns.

It was now time to take the TNT R far away from the maddening crowd, and do some whispering with the wind. After we got out of Pune city, we headed to Lavasa. But before we entered the ghats, we hit the highway, and this is where we decided to unleash the beast. Twist the throttle, and, by Jove, it pushes you back and then blasts off. There isn’t any lag or warning. If you have some real cojones, you will sit back, feel the fear leaving your system, and then truly start enjoying the ride. Fear is a good thing though, as it ensures that you respect the machine and don’t do anything stupid. The TNT R is like heavy metal music – it’s loud and gets you high on speed!

After flirting with it the 200km/h range, it was time to simmer down for a tango with the ghat roads. The Benelli was in tune with the road conditions and effortlessly took on the bends, with the Pirelli tyres providing ample grip and support. Hats off to the 1130’s chassis, which is undoubtedly the best Benelli has. As it weighs 231kgs, sweeping corners were easy, and I never had to make any additional effort. It stays planted, and gives you a lot of confidence. Another feather in cap is its riding position. Though it is aggressive, it’s not strenuous on your arms or legs and the split seat provides good support and comfort to both the rider and the pillion.

The Benelli TNT R easily exceeded my expectations, as it’s the best bike in the Italian bike maker’s line up. Incidentally, it is also the most expensive one in Benelli’s portfolio at almost Rs 12 lakhs. And that might be the biggest obstacle for it to climb, since it’s still a relatively unknown brand in the country.

The way the TNT 1130R is sculpted it could easily be called Adonis – God of good looks. While most of its rivals have a bulky and clean-cut design, the TNT R is an enticer with its prominent and exposed tubular trellis frame. This will be hard to believe, but the design that we’re going gaga over is almost 10 years old – but, by the looks of it, it can soldier on for another decade. The chiselled tank beautifully merges with the rest of the bike, but its extensions make it prominent without looking garish. With no unnecessary body panels covering the TNT R, it looks raw and aggressive. It definitely is a crowd puller.