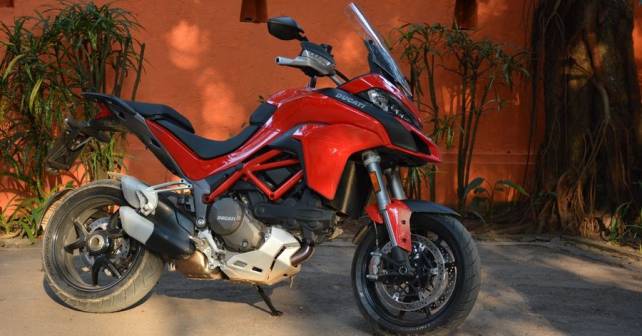 The latest addition to the Multistrada lineup is the 1200 S. It’s got everything you could ever want in a motorbike and then some more. Jared dashes over to Thailand to take this new-age super-sports tourer for a ride.

Sports Touring is still not a properly understood concept in India. You could blame the lack of bikes available for the job, or you could blame our terrible infrastructure. You can come up with plenty of excuses, but the fact of the matter is that it’s nearly non-existent. But that could very well change. Ducati – our favorite Italian bike manufacturer – is fresh off the boat in India, and they have brought in some exciting products like the Scrambler, the Diavel, and my personal favorite, the Monster, in the last year. All of these machines – or masterpieces – are game changers and have created their own segments in the Indian market. The Multistrada 1200 S is yet another new bike from the Bologna Clan, and I just so happened to ride this new Italian super sports tourer around Thailand and I have to say it’s something that can’t quite be explained in just a few paragraphs. 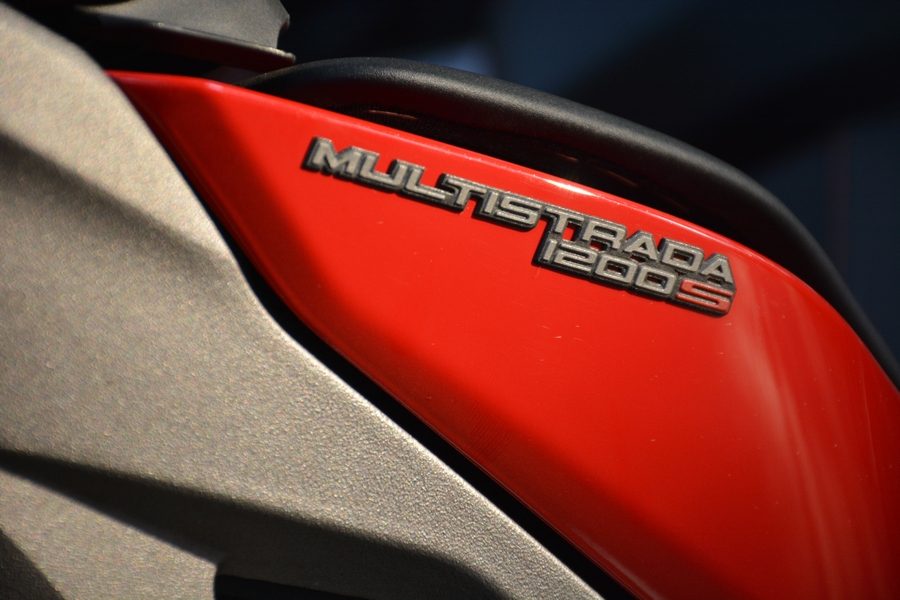 But, let’s just forget about sports touring for a second and talk about the engineering of this new bike. There is so much technology in the new Multistrada 1200 S that you would probably need to write volumes to explain how everything all works together. There is the brand new Testastretta DVT engine, a brand new frame and subframe specially designed for dynamic riding, Ducati Electronic Suspension and Sky-Hook suspension, Ride-By-Wire, and then it’s got something called an Inertial Measurement Unit (borrowed from the Panigale) that computes every movement of the motorcycle every 10 milliseconds, and this in turn helps control the Ducati Traction Control, Cornering ABS, and Ducati Wheelie Control. To top it all off, the bike also gets a Ducati Multimedia system that can be integrated with your phone and you can download a special Multistrada Link App, making it the first ever connected Ducati bike.

At the presentation the folks from Ducati told us that the Multistrada 1200 S is actually 4 bikes-in-1, and that’s because of the four different riding modes you can choose from. These modes include Sport, Touring, Urban and Enduro. As each of the names of the modes suggest, the setting of the bike – and I mean every setting of the bike – is adjusted according to the mode you select. So if you opt for Sport, the engine revs higher and offers you the full 160bhp and 136Nm of torque, and it adjust the levels of the ABS, Traction Control, Wheelie control, suspension, and so on. If you choose to take the road less travelled, or road less built, then you can switch to Enduro, and here engine power is brought down to 100bhp, and again the suspension is adjusted, while the ABS and traction control is switched off completely. The same goes for the Urban and Touring modes, and the bike adjusts itself to suit those riding modes. Even the information displayed on the all-new full-colour digital display unit changes according to the mode selected. But you can also play around with the settings and change whatever you want to suit your riding needs. All you have to do is toggle through the brand new back-lit switch gears. 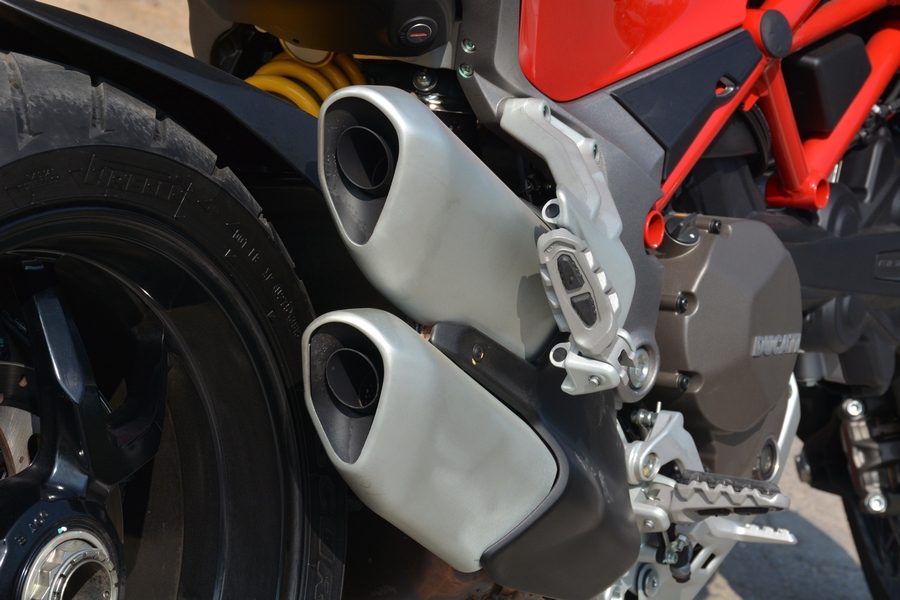 We don’t need to go too much into the design really, because as you can see the new Multistrada follows typical Ducati styling DNA – or just plain ‘awesomeness’. It’s got new LED lights, and uses full LED lighting. The suspension now gets 48mm Sachs at the front and a low-friction movement monoshock at the rear. Two 330mm Brembo disc brakes are on the front wheel and a 265mm is on the rear wheel, and together with that new age braking tech we spoke about, they do a phenomenal job.

I rode the bike on all types of roads and tested all the riding modes, and I have to say that I was really impressed with the bike. It doesn’t matter if the bike is positioned as a sports tourer, because it’s just such a wonderful all-round bike. It weighs just 209 kilograms, which is pretty manageable, it’s got an adjustable seat height, and an adjustable windscreen. I mean really, this bike can be ridden by anybody because everything is adjustable. It can adapt to anyone and anything. 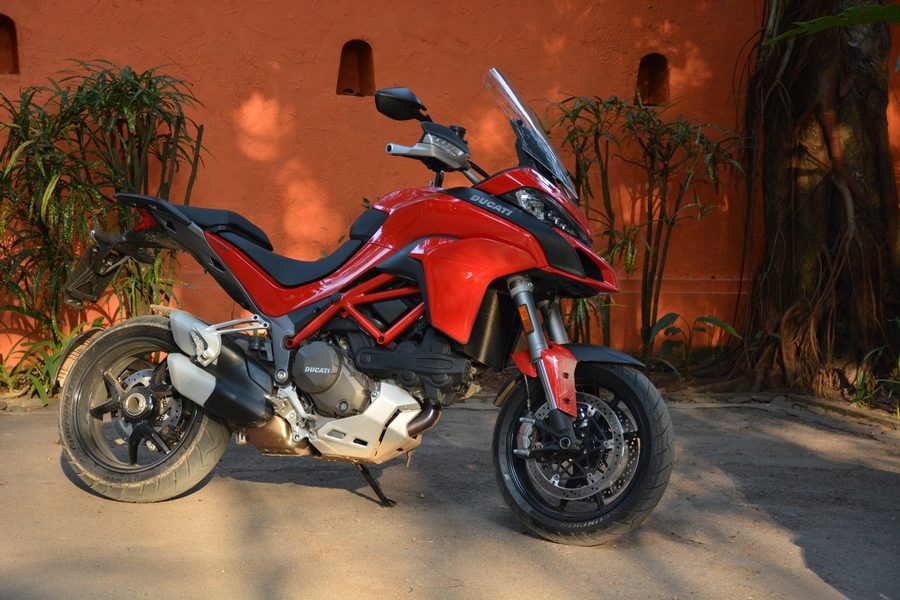 The new engine is just so beautifully engineered and refined, and its performance is sublime. The Ride-by-Wire technology offers the smoothest and most instant throttle response, and when you want the performance of a super sports bike you get it right away. Then, if you want the performance and comfort of a tourer or cruiser, it can be adjusted. The only thing it won’t do though is offer you an exciting off-road experience. For that you will have to wait for the Enduro, which will hit our shores in June. However, the 1200S has got some of the most advanced tech ever seen on two wheels and there are very few bikes in the world, let alone India, that can offer you a better package and a complete rounded riding experience, and it doesn’t matter if sports touring is your cup of tea or not. So, if you ever find yourself trying to decide what kind of motorbike to buy, you can get all of them if you buy the new Multistrada 1200 S.