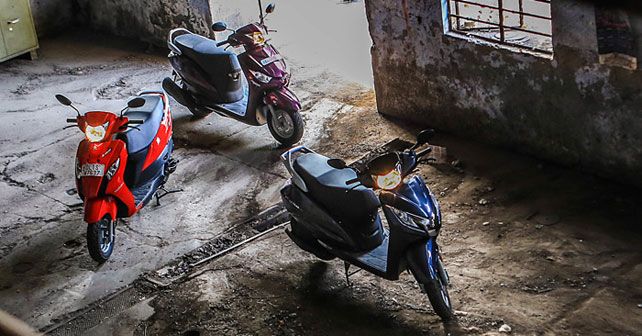 Scooters might not get your heart racing, but these modern two-wheelers – the Honda Activa 125, Suzuki Let’s and Yamaha Alpha – manage to sneak in a bit of fun while being as practical as ever. So we decided do a Honda Activa 125 vs Suzuki Let's vs Yamaha Alpha comparison to find out which one of these outsmarts the other one.

Scooters have always been associated with utility – synonymous with unclejis ferrying around their families, and more recently as being the practical, easy-to-ride option for women. But, in 1999, Honda dared to do the unthinkable and change this mentality when they entered the Indian market with the Activa. I must confess, like millions across the country, I was disappointed as I was expecting a macho 150cc bike from the famed Japanese manufacturer. But then, what did I know about Honda’s meticulous strategy.

It’s been 15 years since then, and now the scooter segment is flooded with many players vying for the top position. Testimony to the massive growth in this market are hard-core motorcycle companies, Suzuki and Yamaha, who have joined this race and come out with their own contenders as well. So, we pit these two new challengers – the Suzuki Let’s and Yamaha Alpha – against the mighty Honda Activa 125. 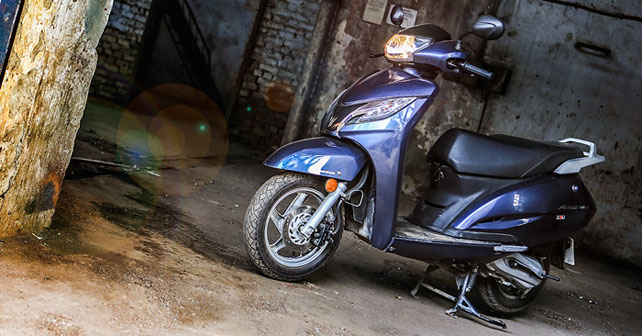 A lot is expected from the Activa 125, as its 109cc avatar was not just a runaway success but still remains the benchmark in this segment. One glance at the 125, and you know it’s an Activa. Though it predominately retains the Activa’s conservative looks, the 125 gets a completely new front fascia, which has a prominent V-design that integrates both the headlamps and the turn indicators. The Y-shaped chrome nose adds both a contemporary feel and increases road presence. Being Honda’s premium scooter, the 125 gets five-spoke alloy wheels, telescopic front forks, and a new instrument cluster that consists of a big analogue speedometer and digital fuel gauge. What was a bit surprising was the lack of a rear brake lock clamp, which is very helpful while parking. Under the seat, storage space is big enough to keep a small full-face helmet, but it would have been nice if it came with front lockable glove box.

Suzuki, on the other hand, has consciously tried to liven up the Let’s front apron with an edgy design that looks like a cross between a Cheetah and James Cameron’s Avatar. The Let’s is striking from the rear as well, and its all-in-one rear lamps and indicators housed together give it a youthful feel. And it does get a brake lock clamp on the left side. The all-analogue dials could have been designed more innovatively, as they come across as a bit jarring. The Suzuki has limited space beneath the seat, and like the Activa 125, it too lacks front storage space.

The Alpha, meanwhile, is Yamaha’s answer to a more mature set of buyers. Unlike its siblings, the Ray twins, the Alpha lacks the bling factor and doesn’t have a sporty looking fairing. The design strokes are more traditional, with sweptback headlamps. What did come as a surprise, however, was the positioning of the tail lamp – which is a lot lower than the other scooters. Yamaha’s body panels have been pumped up to give it a slightly muscular look. The all-analogue console is easy to read but it looks pretty basic. The USP of the Alpha is that it has loads of storage space – 21 litres to be precise, which is quite impressive. 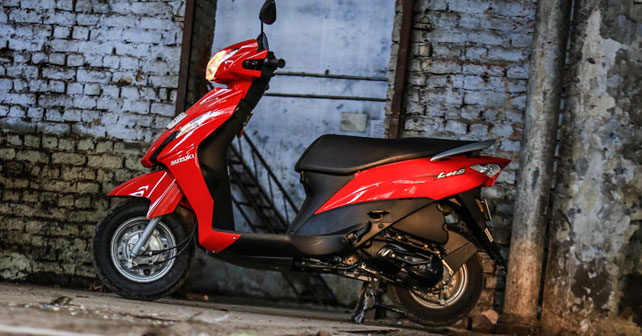 The Activa 125 has the biggest displacement of the three scooters we had for our Honda Activa 125 vs Suzuki Let's vs Yamaha Alpha comparison, but don’t expect it to be a screamer. It’s a well-mannered commuter, with linear and calculated power that takes you from point A to B without any hassles. With 8.6bhp, 0.6bhp more than the regular Activa, it’s the smoothest engine on the market. There will be times when you’ll wonder whether the engine is actually running – that’s the level of refinement that the Honda offers. Twist the throttle, and the response is ideal to combat everyday traffic. The power will not wow you, as it’s quite mellow but it has enough punch to overtake most vehicles in city traffic. The 125 felt a bit twitchy and nervous on the curves though, so it’s best to be a little conservative around the bends. That being said, with disc brakes in the front, it’s stopping capacity is vastly improved and the soft suspension is able to iron out most of the bumps in the road. It seems as though Honda has once again hit the nail well and truly on the head.

The Let’s is the most compact, and the lightest scooter in this review – at 98kgs – and the chassis (no pun intended) Suzuki Lets the scooter flirt in corners and makes you want to push it a bit more than the others. With a 112.8cc engine putting out 8.7 ponies, the Let’s is always charged up and ready to sprint. You might not be able to put your knee down while cornering, but the Let’s certainly holds its line. The stiff suspension makes it an ace in the handling department. Though it’s targeted towards the youth, the seat is fairly small and the footboard too feels cramped. It’s definitely the rebel amongst this trio.

On paper, the Yamaha is the least powerful – with 7bhp – but as it only weighs 104kgs, it more than makes up for its slight deficit in the real world. The Alpha is far from being a slouch as it responds instantly. It might not be as buoyant as the Ray, but it’s still willing to take on corners and show off its handling skills. Keeping in mind that it has one of biggest seats in the segment, at 800mm, Yamaha has managed to balance both comfort and agility with the Alpha. 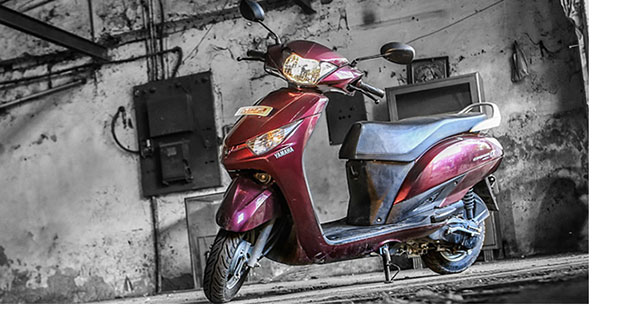 The Yamaha Alpha tries hard to be a mature scooter, with its sober looks, excellent seat and oodles of storage space, but it doesn’t bring anything new to the table. The Suzuki Let’s will definitely be a hit amongst the youth – with its contemporary looks, responsive engine and decent handling capabilities, but it falls short with limited space and cramped dimensions. Honda, once again, retains the crown with its new Activa 125 in our Honda Activa 125 vs Suzuki Let's vs Yamaha Alpha comparison. It might not be the most fun scooter to ride, but its quality, refinement and space are second to none. Sure, you may have to shell out a bit more for the Honda, but it provides utility and practicality, with a touch of class, to the scooter segment that it’s rivals can’t quite match just yet.