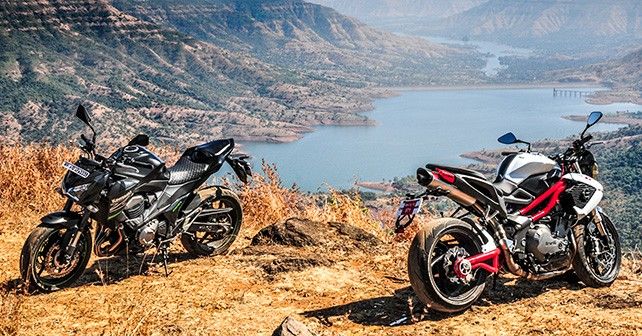 We take the battle of the mid-range naked bikes – the swashbuckling Benelli TNT 899cc and the suave Kawasaki Z800 – to Mahabaleshwar to find out which triumphs over the other.

The boxing world is waiting patiently for the richest fight in the history of the sport that will pit the unbeaten five-division world champion, Floyd Mayweather Jr, against eight-division champion, Manny Pacquiao. The fight is on the 2nd of May in Las Vegas. But since patience is not our best virtue, we decided on a bout of our own. No, I didn’t take on our very own Bibendum, a.k.a. Jared Solomon – as that would simply be hara-kiri! He, being 6-foot-3 and a few hundred pounds, and me barely 5’8”, the best ploy for me would be to scream ‘banzai’ and run in the opposite direction. Instead, our steeds got inside the ring. The heavyweight Kawasaki Z800 versus the challenger Benelli TNT 899, and the stage was not in Las Vegas, but in the beautiful Western Ghats.

Many will say it’s sacrilege to visit Pune and not ride down to Mahabaleshwar. As I have performed this gaffe too many times to remember, we decided to paint this strawberry belt with black, white and streaks of red. With barely 120 kilometres to cover one way, we decided to head out early so that we could really push these naked bikes and hear the wind howl.

With hardly any traffic on the road, we happily twisted the throttle and let the engines roar. The TNT 899 drowned out the Z800, and the howling griffin-like note of the underseat exhaust did give me an adrenaline rush. The sound will not be music to everyone’s ears, but in time you start to appreciate (and even get addicted) to it. The Z800’s imposing quad exhaust pipes, meanwhile, smartly tuck into the chunky triangular muffler. Push the rev needle over 5,000rpm, and that’s when the throaty acoustics begin to play.

After leaving the city limits behind, it was time to poke these monster powerplants – Benelli’s 898cc and Kawasaki’s 806cc – and find out what they’re capable of. The Italian glam bike’s engine response was lightning quick – it took off the moment you twisted the throttle. Mind you, if you’re expecting smooth acceleration then you’re in for a rude shock. The Benelli lacks the refinement we expect of bikes in this segment, but that hardly dampened the fun factor – as it easily went over 150km/h without a whimper, and was eyeing to cross the 200km/h mark. The 120 ponies unleash pure power without any lag whatsoever. Even though this beast loves high revs, it’s very versatile as it comfortably cruises in the city without making a fuss.

The Kawasaki is a different machine altogether. The silky, refined engine is simply a class apart. It refuses to play a note out of tune – even when it’s pushed to its limits. Well, that’s Japanese wizardry for you! The Z800 is so smooth that power delivery is completely linear, even at full throttle. One look at the speedometer, though, confirms that it is very responsive – and the first thing that flashes to mind is Kawasaki’s claimed top speed of 233km/h. As it is a street bike, the gear ratios are short – which make it ideal to ride in city traffic. Now, compared to the Benelli, the Z800 has less output – at 111.4bhp, but it’s more than enough juice to keep you on the edge of your seat. And the lack of any vibrations speaks volumes for its build quality.

On a flat highway, both bikes are steady at high speed. But, when it comes to riding stance, the Z800 was a lot more forgiving on the shoulders, back, and even the posterior. You sit slightly forward, but the widely placed handlebars and the step seat – which provides extra support to the lower back – make it a relaxed experience.

In the case of the Benelli, it’s all about being aggressive and that’s translated into the seating stance as well. What we couldn’t fathom was why the Italian bike maker opted for angular handlebars – which not only restricts your hand movements, but also puts additional pressure on both your shoulder and forearms.

As we started ascending the Ghats, Jared blazed past me on the Z800 and took a sweeping turn with ease. I followed the Kawasaki, and quickly realised that the Benelli is more of a physical machine and one needs to lean further and put some more body weight behind it. For enthusiasts, the latter is definitely a more fun and involving bike, but for most riders this may be a bit too demanding for their liking. On long rides, the TNT 899 is certainly the more physical bike, with a more extreme suspension set-up.

The Z800, no other hand, is a bike you ride with a flick of the wrist. It attacks curves without any fuss. The effortless handling may make seasoned riders feel like you’re controlling it with a Playstation joystick, but for the majority the Z800 is more forgiving since it doesn’t spring any surprises. Plus, the Z800 has excellent ride quality and easily cushions potholes.

We haven’t said much about appearance, because it’s obvious that the Benelli is far more appealing than the Kawasaki. The futuristic design and tubular frame make the alluring TNT 899 dazzle in a crowd. The Z800 is a beef-cake, with bulging biceps ready to bulldoze anyone who dares to come in its way. Its simplistic design would have been a lot more appreciated if we hadn’t been spoilt by the Bajaj Pulsar – which look similar to the Z800, but of course is smaller in size.

As a complete package, the Kawasaki Z800 streaks ahead thanks to better refinement, a ride stance that’s more practical, and a better turning radius, which makes it easier to manoeuvre in traffic. The TNT 899 has a lot of things going for it, like brilliant road presence, a fire-breathing engine, and it’s an enthusiast’s delight when it comes to handling. But it needs better comfort and refinement. If looks could kill, then one look at the Benelli and you’d be dead. But, as an all-rounder, it’s the Z800 that delivers the knockout punch – and, at Rs.7.35 lakh (ex-showroom, Pune), it’s the most affordable in-line, four-cylinder motorcycle in India. 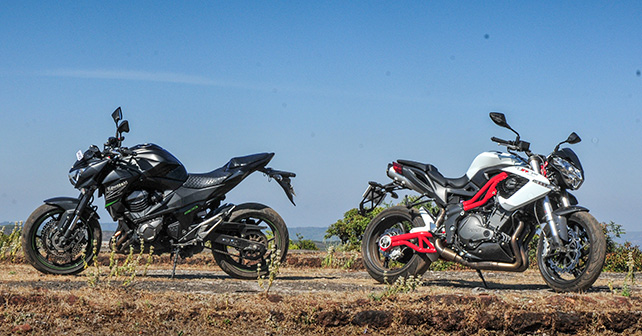